No matter how small a community is, crime still happens. Law enforcement in the area may be limited to only a few officers, but they still deal with a high volume of evidence. They’re typically doing it in small spaces while resources are scarce. Taking a fresh look at the property room can make a positive impact.

In TV crime shows, police departments and crime labs have plenty of space. CSI Miami’s building even has an architecturally striking exterior, and officers drive Hummers. But that’s not the reality most law enforcement agencies live with. Especially, when the police department is a smaller or mid-sized one, outside of a major city (where the crime shows seldom go.

The small or mid-sized police station is typically in a tight space in an older building. It’s been in the same location for a long time, and it’s been years since its property room or evidence storage processes have been updated. Yet, without the correct technology and tracking in place, those officers risk ruining evidence or not being able to close a case due to chain of custody concerns in court.

Best practices in police storage have evolved. Even with space and funding limitations, changes to evidence storage are essential to reflect the new understanding of how to correctly handle and store guns, money, drugs, sexual assault kits and other evidence and property.

No victim wants to learn an attacker will get off because the DNA sample wasn’t stored properly. No detective wants to be expected in court with evidence and unable to find it on the appointed day. No prosecutor wants to have a case fall apart because the defense has effectively called into question the security of the evidence storage. That’s why property rooms are changing the way that they do police storage. 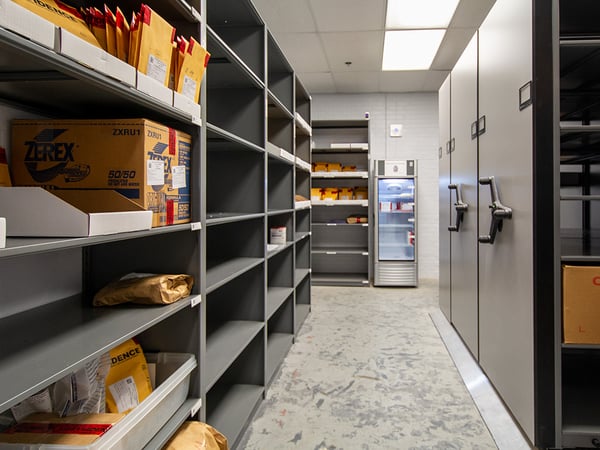 Police Storage Makes the Most of Space Limitations

Evidence storage needs proper tracking to know when to be filed away, destroyed, used for court or returned to the owner. Without a tracking system, this is difficult to manage. But even the best tracking software can’t do much if the actual evidence and property storage is a mess.

Improving police storage can make a big difference, even on a smaller budget. With the introduction of evidence lockers and mobile storage units, a police department can add space, delineate particular areas for different types of property and gain efficiency from more organized storage.

Knowing where things are and knowing they are being stored securely, the property officers can keep up with the chain of custody. At the same time, they can more easily track when evidence or property is due for release or destruction. Before the evidence gets unwieldy all over again, the property room can purge effectively.

Take the Forest Park Police Department (FPPD), in a suburb nearby Cincinnati, Ohio. The 38-officer department was dealing with a high volume of property and crime scene evidence. But it was trying to keep track of all of it old school. The department was using an office-style system with stationary shelving. Each officer was assigned a plastic bin that sat on the metal shelving waiting for evidence to be dropped off.

“It was pretty tough to find things. It got unorganized really quickly,” said Det. Phil Crowley, who is in charge of the FPPD’s property room. Purging was challenging too, involving a lot of follow-up with the reporting officers. With tiny aisles and too little space, the evidence room was cramped, confusing quarters.

That’s not the case any longer. Now every piece of evidence or property is clearly labeled, tracked by the FPPD’s new software and sorted and stored in a distinct area within the expanded and upgraded storage space. Different types of evidence have their own storage areas on stationary or mobile shelving. There’s also refrigerated evidence storage.

Officers can have greater confidence in the collection of evidence and the chain of custody thanks to a pass-thru evidence locker. Customized to the available space in the FPPD, the locker faces out to a processing room. Their police officers can enter information into the tracking system, package the items appropriately, then deposit the property or evidence in a locked cabinet.

On the other side of the wall, property officers can access the separated, tracked evidence and properly store it for future use. The refrigerated shelving that is part of the pass-thru locker helps preserve biological specimens too.

For Crowley’s team, the revamp of storage meant greater efficiency even with the increase in space. With mechanical assist high-density shelving that can close evidence storage aisles when they are not in use and by building fully vertical in the available space, the department nearly tripled its available space, he said.

Now the FPPD is “making the most of the space” it does have. Plus, there is “plenty of room to grow, which is great,” Crowley said.

The purging process is much smoother now too, Crowley said. With the organized sections of evidence, the officers know where things are when they’re needed.

“Sometimes it's hard to find the money,” Crowley admits. But if he has one comment for other constrained law enforcement agencies it’s that upgrading storage is worth it. “It’s definitely the way to go."

Rethink public safety evidence and property storage to add efficiency, improve productivity and ensure the security and integrity of evidence preservation and retrieval.

No matter the size of the space, intentional storage solution choices can make the difference your department needs. Contact Patterson Pope’s experts today! 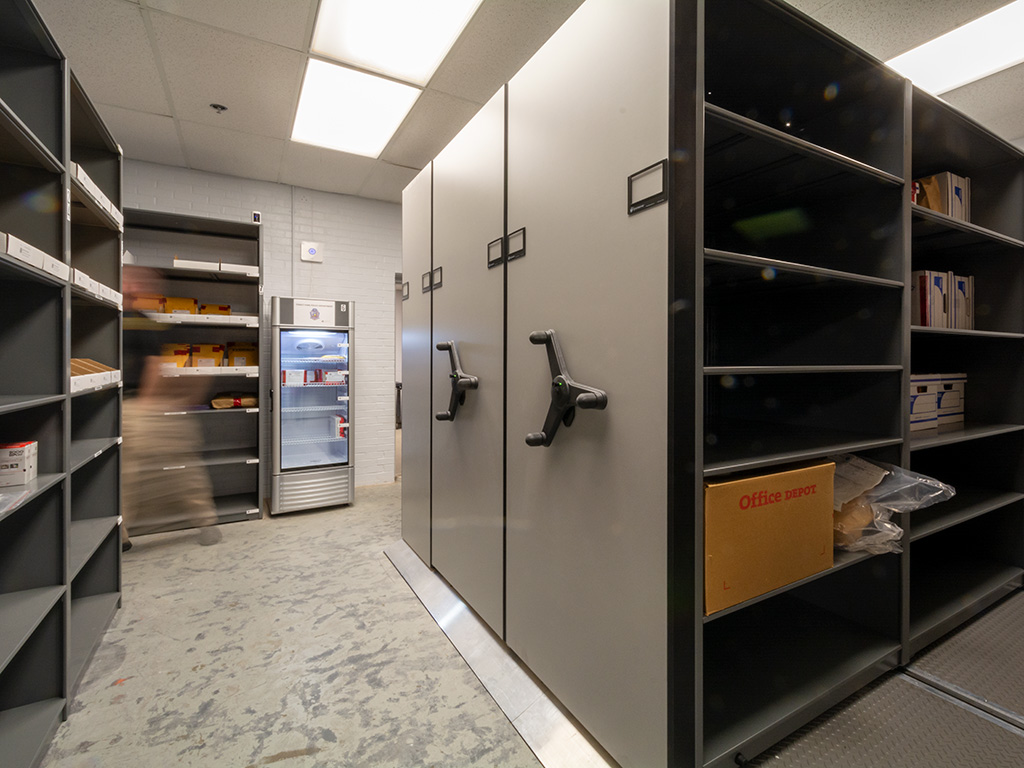 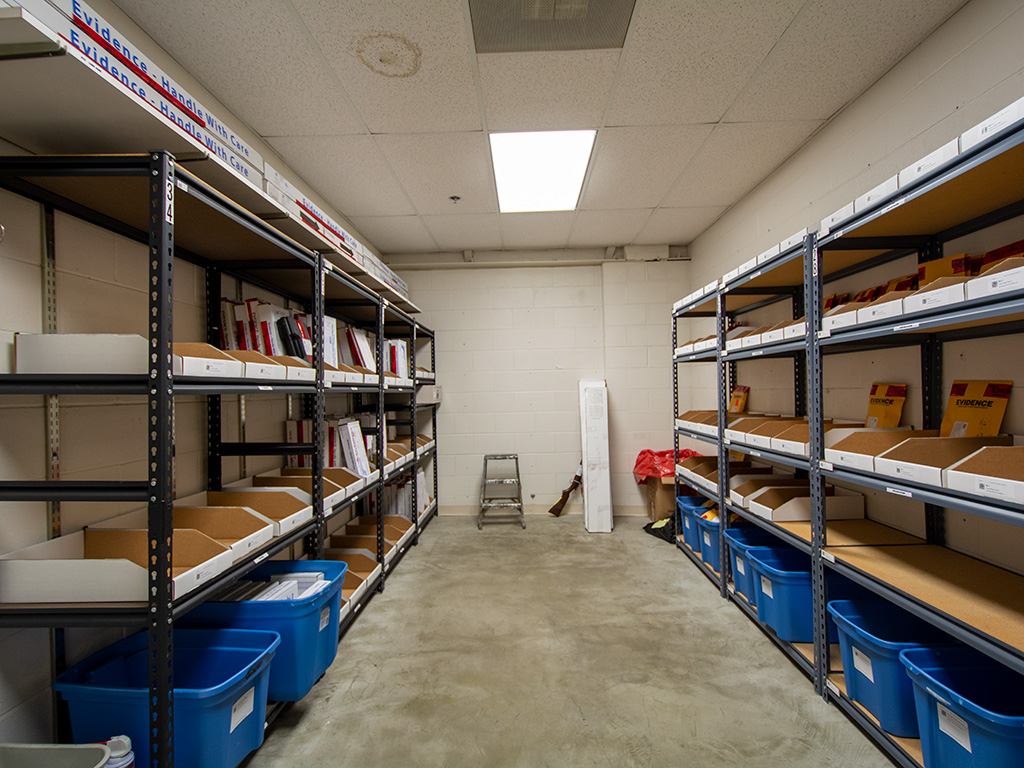 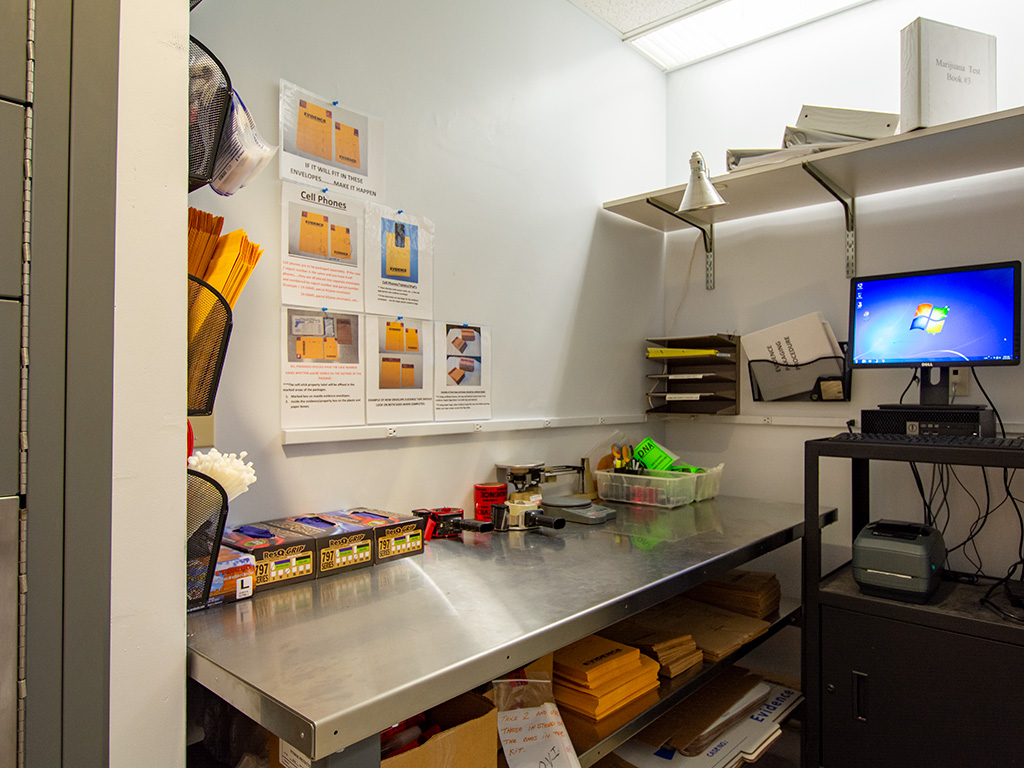 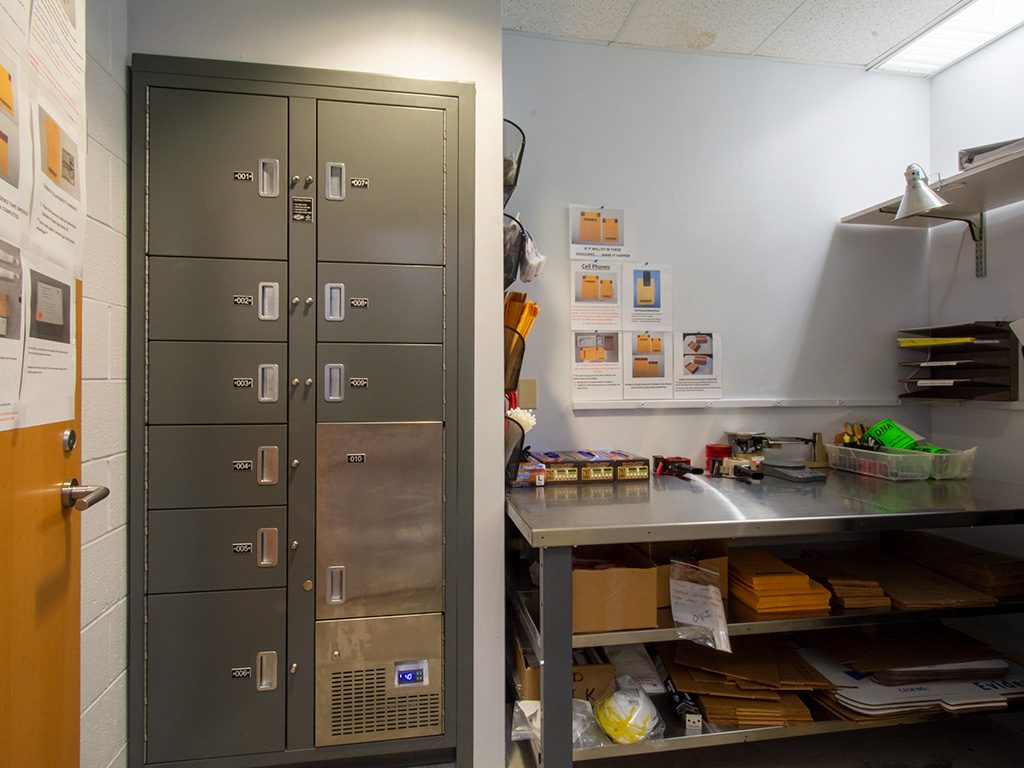 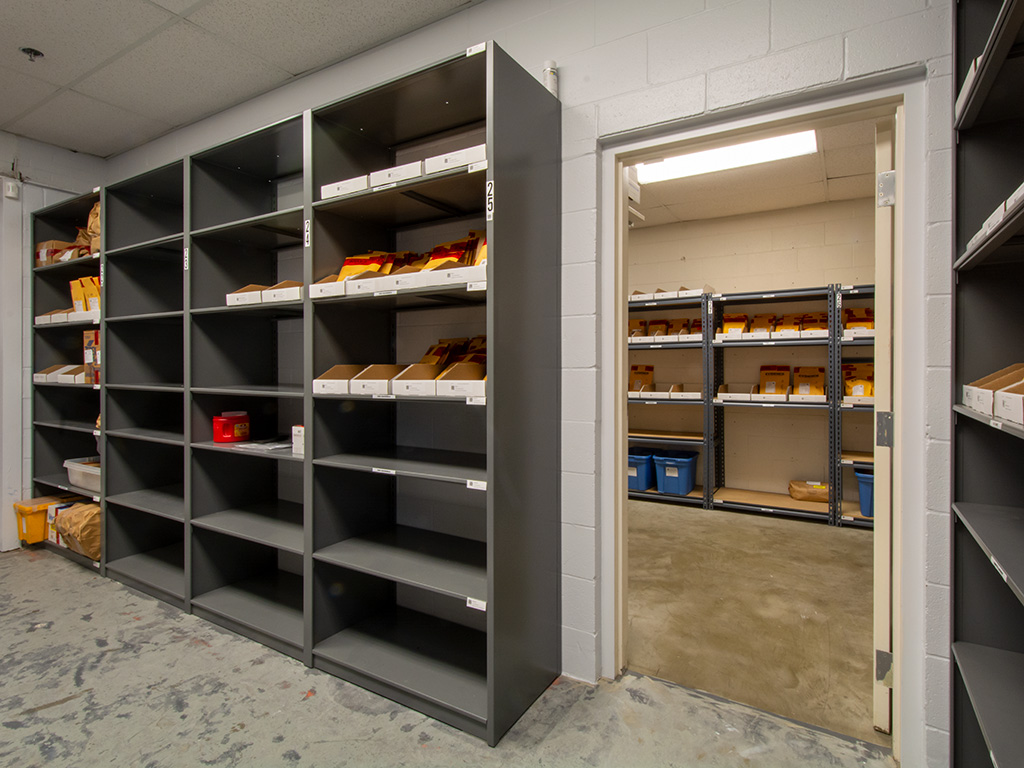 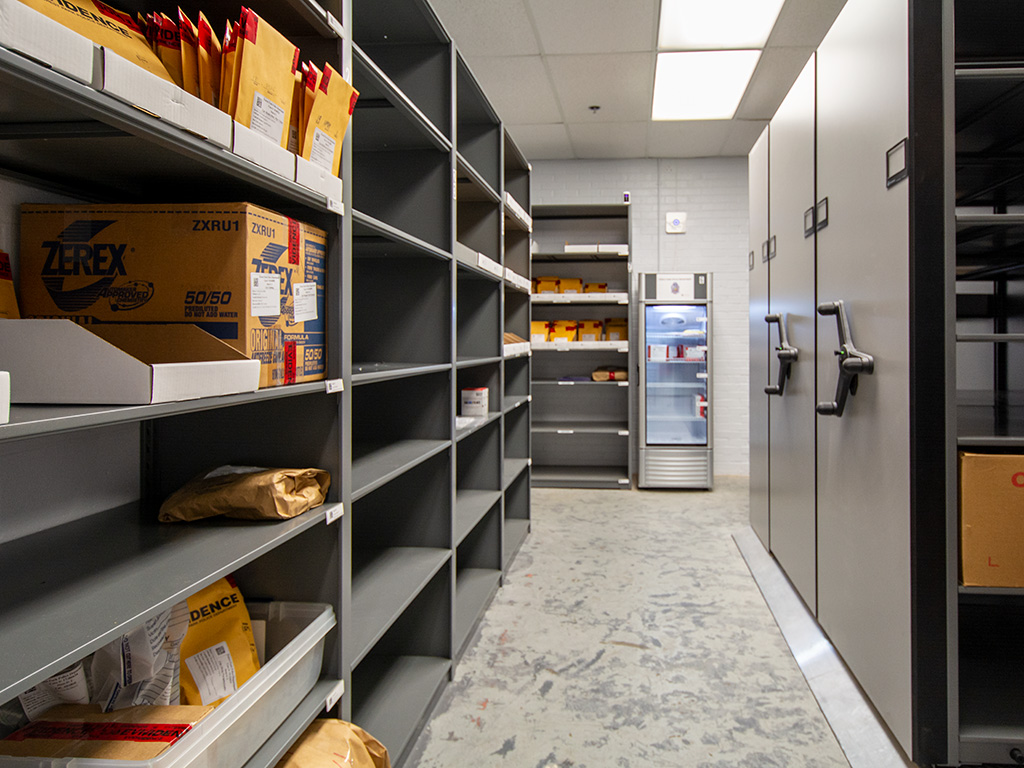