The University of North Carolina Tar Heels and Duke University Blue Devils may not see eye to eye on the court, but for basketball, their athletic equipment storage areas are on the same team. We had the opportunity to visit our installations at both universities recently, and it was truly a basketball fan’s delight.

In Chapel Hill, recent renovations to the Dean E. Smith Center caused the basketball storage room to be moved to a smaller and somewhat odd-shaped room. Storing the same amount of stuff, like uniforms, socks, t-shirts, shoes, towels, supplies, basketballs and game day items, in a new room that was 1/3 the size of the old one presented a challenge that even running the 4-corners couldn’t solve. An electrical high-density mobile shelving system and stationary storage shelving from Spacesaver did the trick. Not only were the Tar Heels’ storage needs solved, but the electrical mobile system provided the additional benefit of securing their stuff by limiting access to the system. “We have folks in and out of here all the time, so it has been a big help to be able to lock down certain aisles so everything stays where it belongs” Ken Crowder, Basketball Equipment Manager at UNC said. “When I first saw this room, I thought there was no way we could get everything stored in here, but it has all worked out really well.”

Meanwhile, over in Durham, the Michael W. Krzyzewski Center, a new 56,000 sq. ft. athletic and academic facility was built. The facility combines academic space, an events center, and athletic training and practice areas including 2 basketball courts. Just off the courts is a large storage room, and inside that room is a large Spacesaver electrical high-density mobile shelving system and stationary shelving with Rollok doors. Coach Krzyzewski (Coach K) camp items, and autographed basketballs, men’s and women’s basketball uniforms and shoes, t-shirts, basketballs, supplies and archived basketball uniforms are all stored in there. David McClain, Director of Athletic Equipment, at Duke, called several schools around the country including the University of Wisconsin, and Oklahoma University, to get input on the type of storage system that would fit his needs. “They were all very high on Spacesaver storage systems, and that played a big part in our decision to go that route. We are glad we went that direction because it has been a great solution for us.”

We wondered if David ever called Ken at UNC? “Oh yeah, I talk to him all the time. It is my understanding that our Spacesaver system is quite a bit larger than the one they have over there,” he said with a smile. Ah, the rivalry continues. 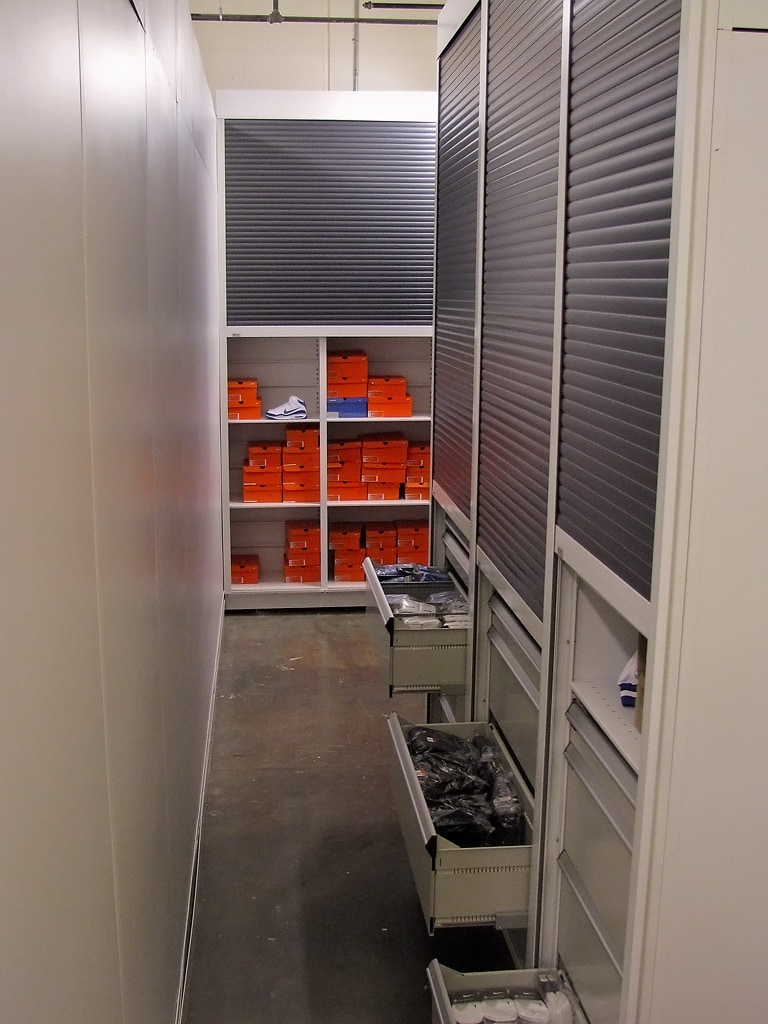 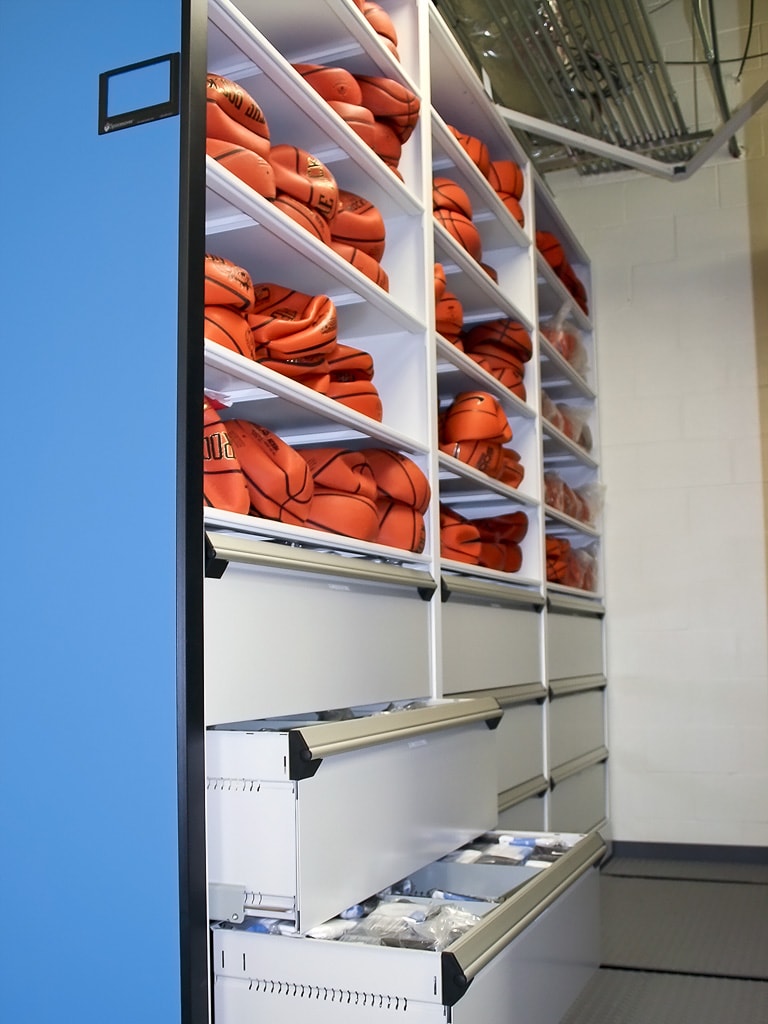 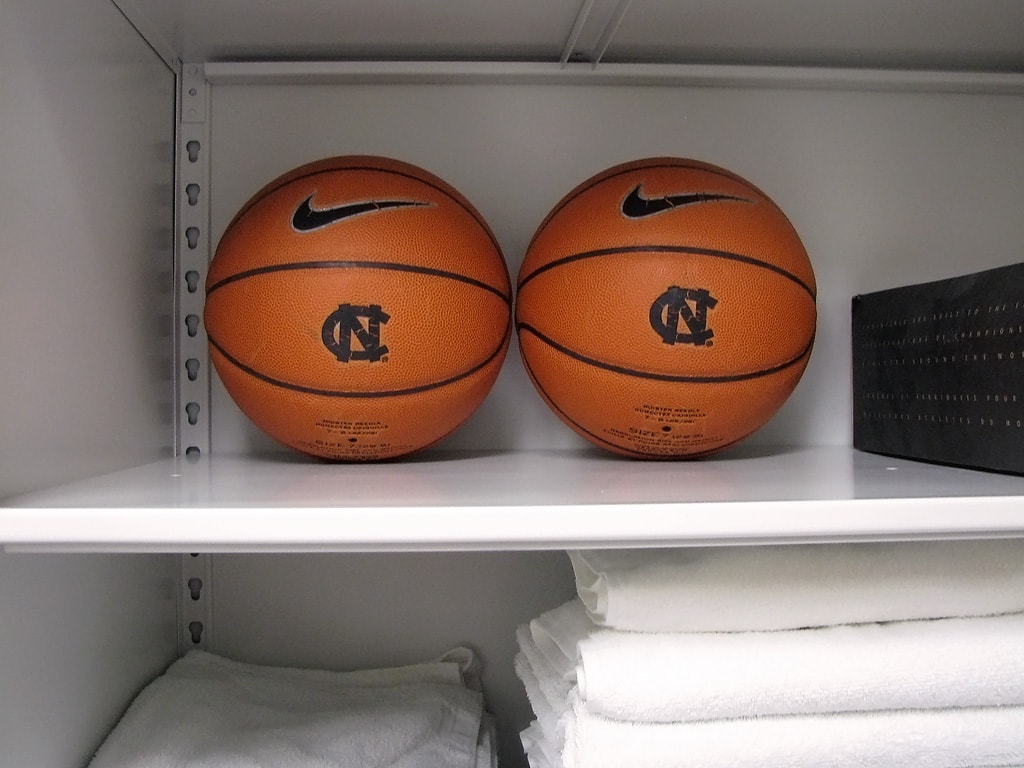 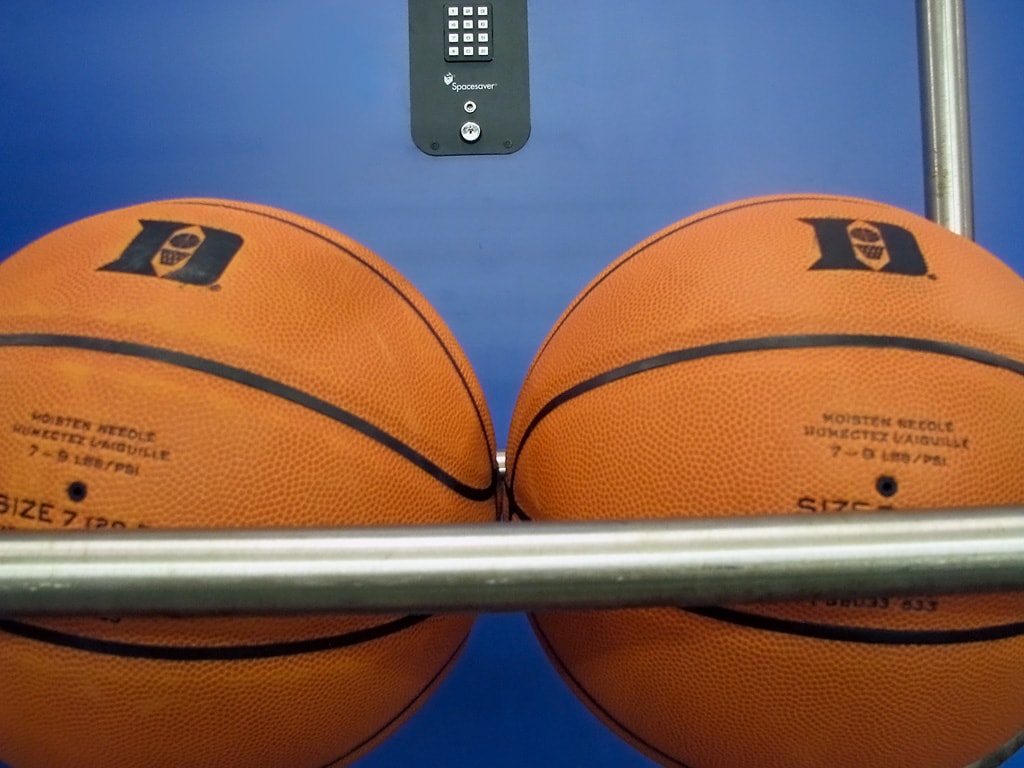