As the Collections Curator for the USS Yorktown, Melissa Buchanan is the first to admit that the World War II-era aircraft carrier was not designed to be a museum. Its designated purpose was to help U.S. personnel help defend the world against tyranny. Yet since 1975, when it was first towed to Charleston Harbor, it has served as a maritime museum – a staunch reminder of the service and sacrifice provided by so many. Today, the museum stores, collects and organizes mementos from the ship’s storied past.

“Working on the Yorktown here at Patriots Point is absolutely amazing,” said Buchanan. “Both of my grandfathers served in World War II. They were both in the Army, so I imagine I would get a lot of flak from them both for working aboard a Navy ship. But they would be happy that I am happy. I enjoy talking to these people and hearing their stories. I like how we try to bring the ship’s story and the stories of its crew to bear on the present; we bring it to life.”

The items that help today’s museum visitors experience the ship’s history include photographs, audio and video presentations, and numerous personal effects donated by former servicemen and/or their families. One of the most unique collections Buchanan has overseen the assembly of is approximately 150 flags. Measuring anywhere from 3’ x 5’ to an astounding 30’ by 90’, the collection includes mostly American flags. Also included are… 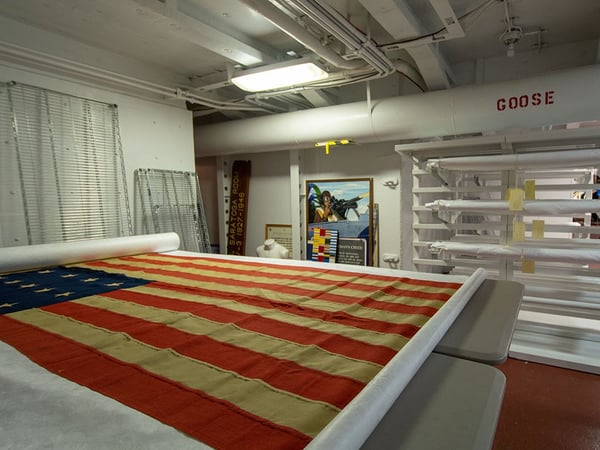 There’s even a flag from the USS Laffey, also docked at Patriots Point, nicknamed “The Ship That Would Not Die” thanks to its exploits during the D-Day invasion and the battle of Okinawa, where she successfully withstood a determined assault by conventional bombers and the most unrelenting kamikaze air attacks in history.

“We usually put them out for special events - say if a ship’s reunion is here. That’s usually a week or two,” said Buchanan. “We have some air-conditioned spaces for them where we can have them out for a little bit longer. We do a lot of rotation of what’s displayed primarily because we just don’t have that much control of the climate onboard the ship.”

Buchanan noted that even more of a concern than the ship’s humidity is the effect of long-term exposure of the flags to sun. The light can have a devastating effect on the dyes used in the flags, especially the red dyes.

“It’s a museum ship, and none of the rooms are square, which would be ideal for textile storage. They have some built-in storage that’s sort of part of what they’re doing,” she said. “When the subject of flag storage came up, we chuckled a bit because their situation was so incredibly unique. They had this one room that, even then, had to have a section of ‘wall’ cut away via blowtorch to add some additional storage space. That was our canvas.”

The oddly shaped room designated for the flag storage presented an opportunity to create a solution as unique as the challenge itself. Located in the bowels of the ship, the room measured approximately 1,200 sq. ft., though the word “square” is used hesitatingly. 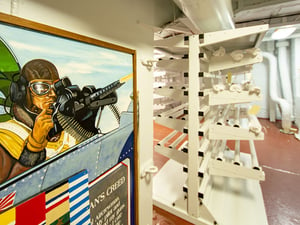 While there was already some shelving in the room, it was ill-suited for the job at hand. Buchanan and her team cleared that out, had the area painted, and prepped it for the new Spacesaver storage solution – textile racks.

“We installed strictly textile rack – five levels per side on most of the racks, and then four levels in those areas where we were installing the units underneath piping,” said Ormand. “Each level can hold three flags (wrapped in Tyvek for moisture protection) on the storage arms or level.  The system can store a total of 144 flags. The system is designed to provide museum storage for 75 4’ x  6’ flags and 69 3’ x 5’ flags.”

“It works really well and it’s allowed us to better organize the collection,” added Buchanan. “It was definitely something that I’d wanted to do for a while, so I’m glad we were able to get it done so well.”

If you’ve ever toured the USS Yorktown – or any of its brethren at museums at various ports – you’ll know that describing the labyrinthine lower levels as “compact” can be understood as an understatement. Though it carried thousands of personnel, the Yorktown and ships like it were designed to be fleet, sleek, and intimidating to the enemy. Again, museum storage was never in the shipbuilders’ lexicon, never mind their design plans.

You can imagine, then, that getting Spacesaver Textile Racks down narrow ship stairs, around tight corners, and through small doors was a fitness test in itself. “We were a difficult case, I’ll freely admit,” said Buchanan when thinking back on the installation. “We have a ladder that we have to go down, and then there’s a very awkward turn. So to get anything down there is a challenge. If it’s too tall, you can’t install it because even though it might be technically under the height limit, you can’t flip it back up once you’ve got it down there. Ours is a very awkward area in which to work. I felt so bad for the installers when they showed up. I really did.”

Beefy cantilever shelving is a strong product that works wonders. It’s not often, however, that it’s loaded onto an aircraft carrier. “The textile rack is a relatively new product from Spacesaver, so we hadn’t really thought about the actual size of the unit compared to where it was going to go,” said Ormand. “We thought, ‘Oh, it’s a typical cantilever. We’ll have no problem getting it down there.’ Well, thank goodness for our great installers and for Melissa’s people, who were there to help us.”

For her part, Buchanan knows that the flag collection helps tell a larger story.

“I feel like we’re really giving people the sense that this was a floating city. By being able to talk with former sailors and their families, see and feel some of these things that commemorate their experiences here, we’re bringing the ship back to life, in a way. We’re giving it a new purpose. It’s a special thing to be a part of, yes. And Patterson Pope definitely is helping us tell those stories.”

There might even be storage cabinets in the Yorktown’s future, as well. Loading them onto the ship, though? That’s something to contemplate on another day.

For more information on this project, check out our Success Story. 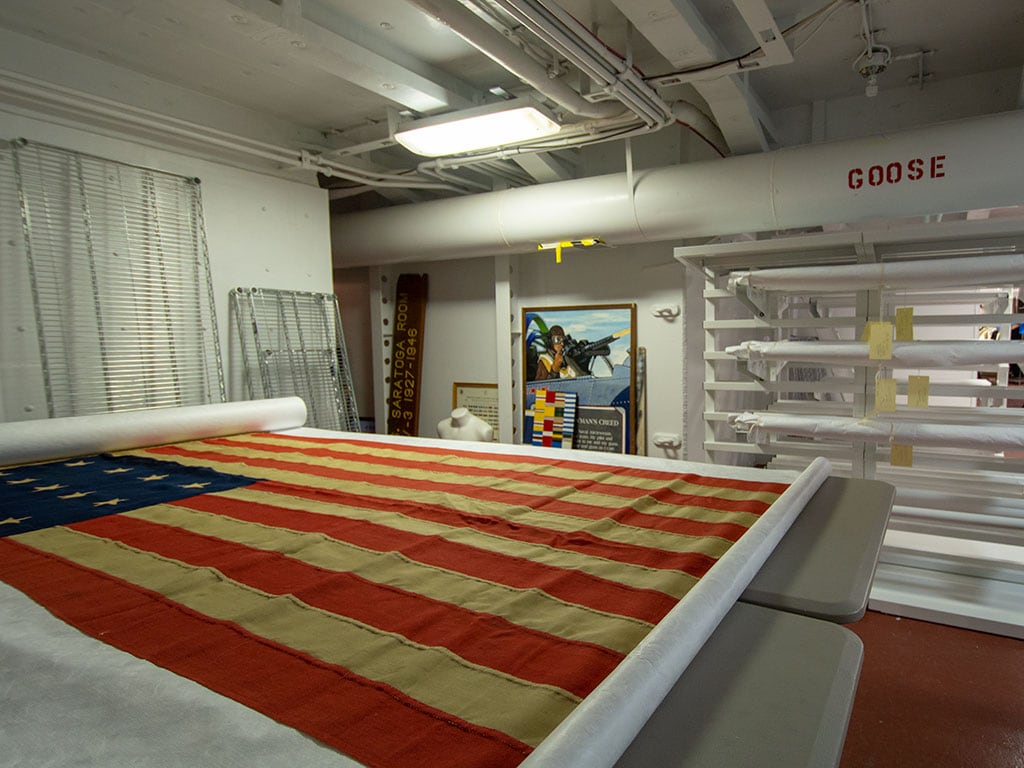 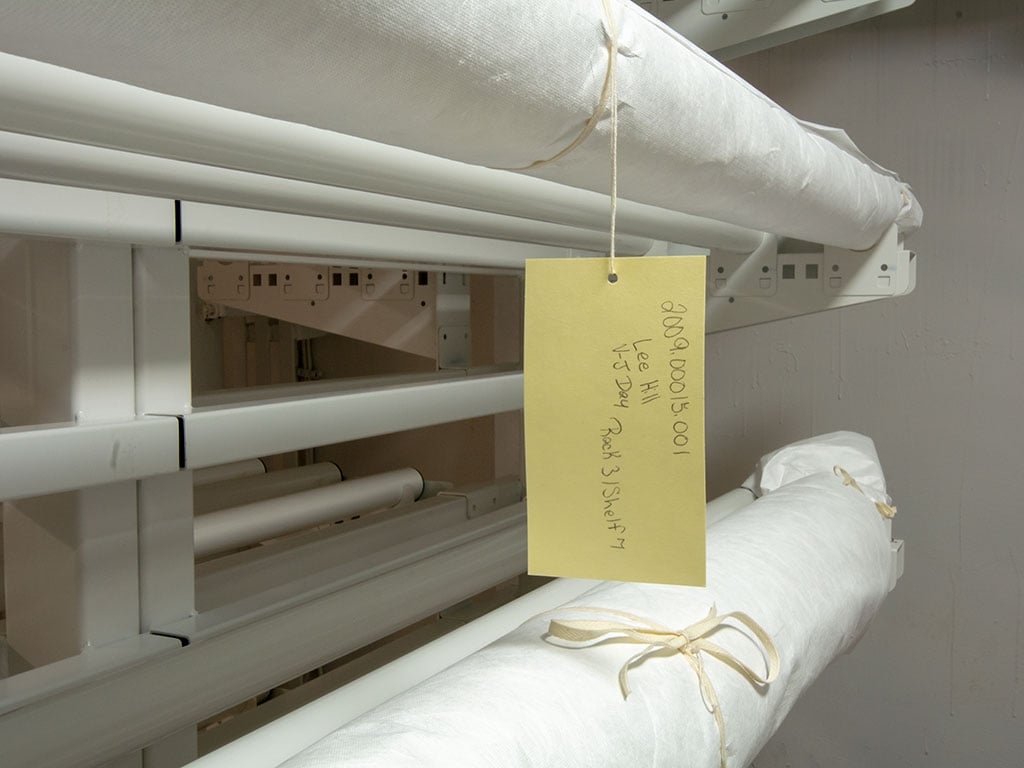 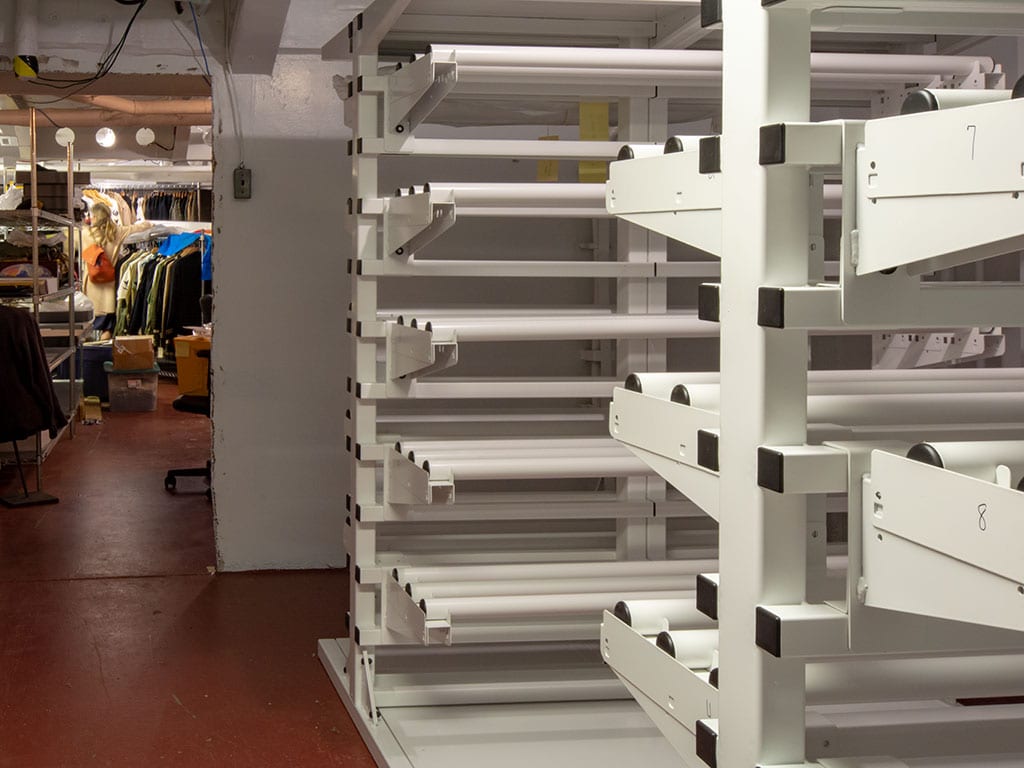 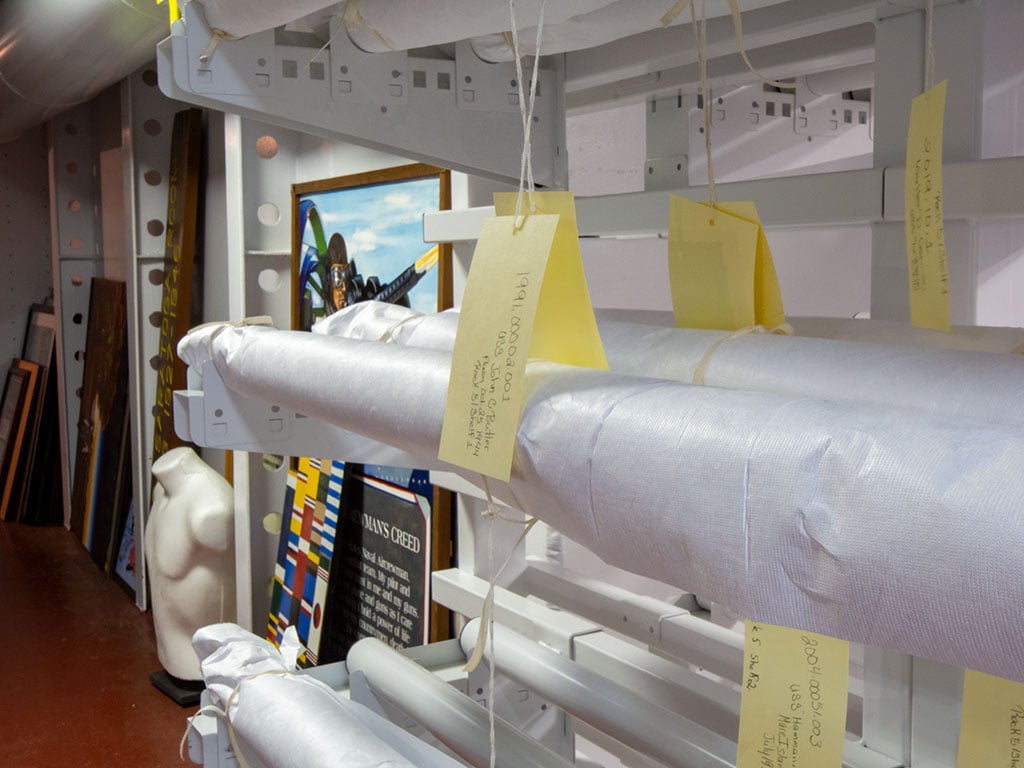 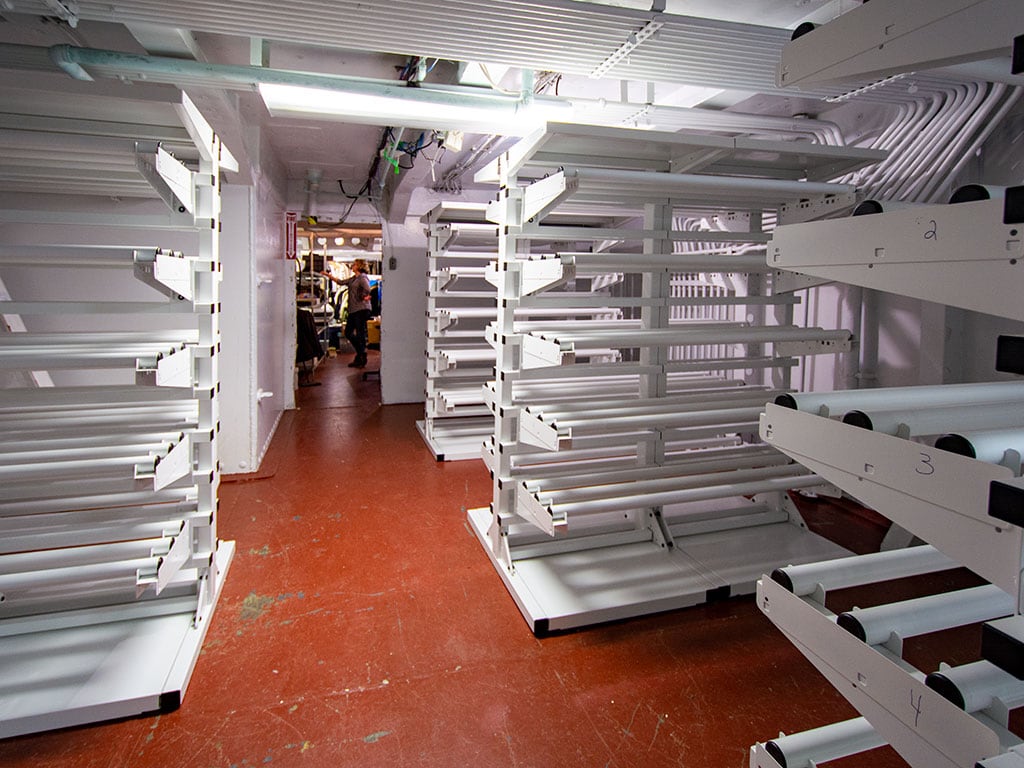 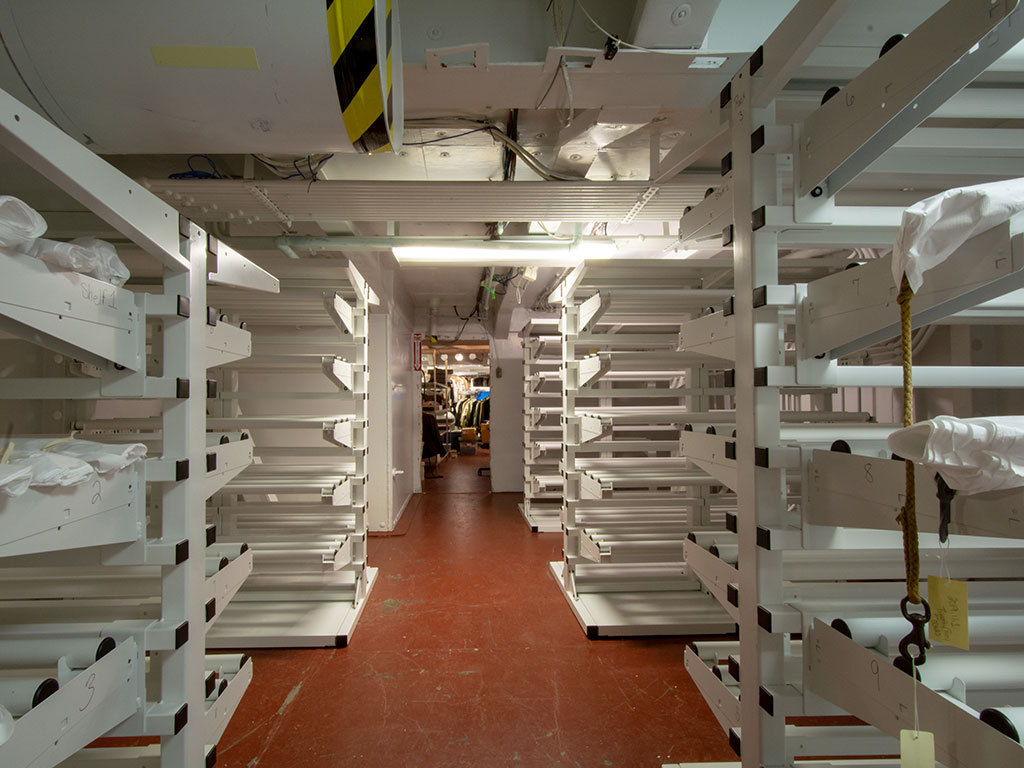