The men and women of the United States military put their lives on the line to protect and serve our country. Making sure they have the best equipment available to help in that never-ending quest is a commitment worth making every single day. Nowhere is that more true than for those individuals charged with packing parachutes for those brave souls who regularly jump out of planes. There is no bigger understatement than to say that today’s paratroopers depend on quality.

Para-rigging is that area of the military where parachutes are packed for future jumps – whether for training or combat. Ensuring that such a critical task is performed safely and successfully is the responsibility of the special tactics team. When one such team’s storage situation became overly crowded, a reimagining of the space became paramount.

“When I first got here, things were really tight,” said the Aircrew Flight Equipment Flight Chief (AFEFC) in charge of the parachute packing and storage area. “Not only did we have a lack of adequate storage, but it was fairly clear that it was a problem that was only going to get worse as we grew.”

A previous association with Patterson Pope at another base led the Flight Chief to reach out to them again. The relationship proved advantageous. 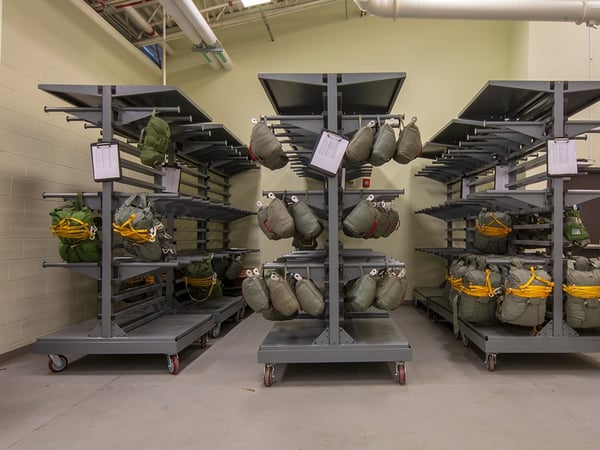 The unit was transitioning its inventory from the legacy MC-4 parachutes to the new RA-1s. While the former models would eventually be phased out completely, their presence in the initial mix led to higher volume in the storage area – an area already beyond capacity.

“We never want to store packed chutes alongside ‘popped’ chutes,” said the Flight Chief. “Given the limited capacity of our original set-up, in some cases we were forced to do just that. We have to think about the safety of our operators; they’re our clients, in a way. So, we needed to come up with a way to reconfigure our 3,500 square foot space (in two buildings) to separate them and add even more storage, if possible.”

An equally problematic issue for the unit was the condition of the original tables upon which the popped chutes were being folded prior to repacking. These were “mobility tables,” which resembled large picnic tables. Designed to be quickly deployed to more austere bases around the world, they were made of wood. After years of usage, that wood had started to splinter and crack. Those flaws could easily grab, snag and tear parachute material, rendering them useless.

With eight people working hour after hour folding clean parachutes and readying them for packing, the first and most critical part of the job was to modernize the worktables. The old mobility tables were moved out and were replaced with tables that boasted 40-foot-long solid surfaces. Polished to pristine condition and completely seamless, the new tables are free from blemishes. Each of the four tables also feature several tie-down rings and pads so that the metal doesn’t scratch up the table.

“The area where the tables are used to be a ramped-up area, as it’s in an old building,” said Patterson Pope military specialist Jane Glass-Waldron, who worked on the project. “One of the things that we had to do was get all the tables to be the same height, so we had to do some shimmying on the tables themselves. Underneath each of these new tables is space adequate for storing 88 popped chutes. This helps alleviate the need for storing chutes on the floor.” 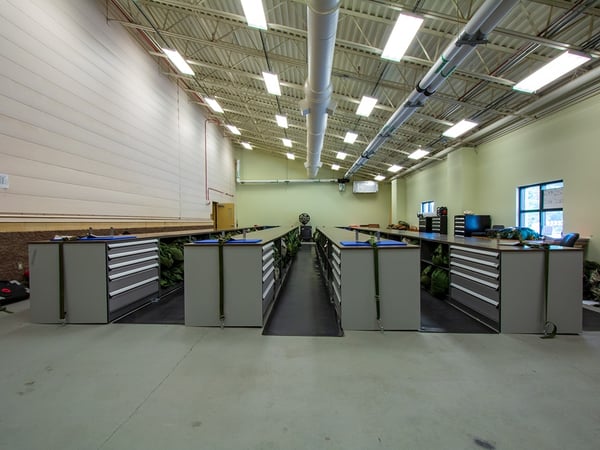 Glass-Waldron has always enjoyed working with military clients. Forethought and exceptional planning are, after all, part of their makeup. And it’s part of hers, too. So, it didn’t surprise her when the Flight Chief already had some ideas for how he wanted to address his unit’s challenges the very first time they met.

“Working with great people and innovating together is one of the most fun parts of my job,” she said. “A lot of times, what a client really needs doesn’t exist ‘off-the-shelf,’ so we get to put our heads together and work toward a custom solution.”

While Spacesaver already had a static parachute rack design that was originally going to be mounted along the walls in one of the rooms, it was input from the Flight Chief that got the ball rolling on a new, updated version. In the quest to attain an even higher load capacity for the carts and thereby speed up the transportation process, the Flight Chief and Glass-Waldron discussed some ideas. Glass-Waldron then took those ideas back to Spacesaver and the result was the Double-Sided Hanging Parachute Rack. The final design accommodates 20 chutes per rack – which is a serious upgrade over being able to only carry two (one in each hand) at a time. Measuring nearly 360 square feet when open, the chutes measure just 2½ feet high by 1½ feet wide when packed.

Keeping the innovation going, the Training Squadron started using the recently approved packing method (already common in the civilian world) that would allow packers to pack the chutes while standing up. The unit had created its own design out of PVC piping, but wanted a commercial, off-the-shelf solution that was more professional in function and appearance. So, that’s what Patterson Pope provided. Called the ProPac Rack, it perfectly suits the task at hand.

“Our team in here packs chutes pretty much every day,” said the Flight Chief. “We pack hundreds of them every month. It’s continuous, and having this new system in place makes a real difference.”

“From start to finish, this job was a classic example of collaboration,” added Glass-Waldron. “It’s so rewarding when you can work together with your client to come up with innovative solutions that perfectly solve challenges. Sometimes it’s great the first time around. But with the ProPac Rack in particular, we came up with some ideas on how to improve it after the initial model. So that back-and-forth process was really fun.”

Fun. Productive. Efficient. Those three words sum up the end result of this military storage project, but it’s the result that it engenders out in the field – and in the air – that means the most to the man who’s in charge of the operation.

“We’re now able to ensure that our operators have the chutes they need when and where they need them. Our system of getting those chutes ready to go has never been better,” said the Flight Chief. “Being in the military, I’ve purchased a lot of things from various vendors, and this was definitely one of the easier processes. You would think that buying something out of a book would be easier, but there is so much specification that goes into a thing like the ProPack. Us building something from scratch was, as it turned out, one of the easier things have ever done. The assistance we received – and the final result – has been phenomenal.”

“Seamless” is indeed the word of the day. 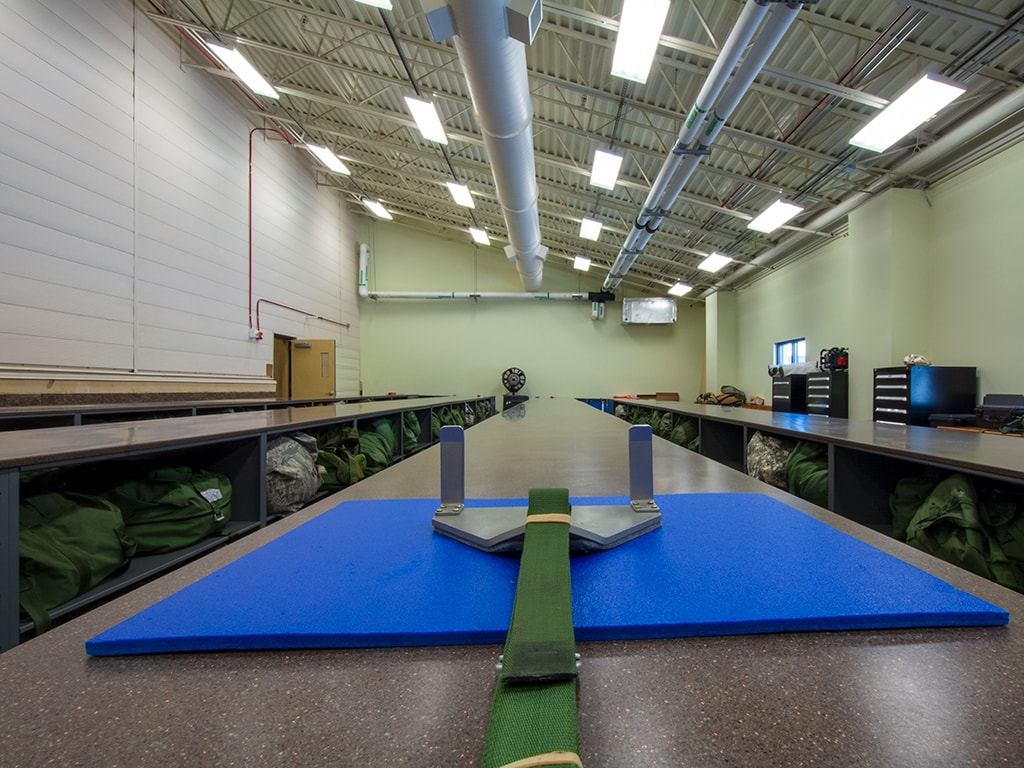 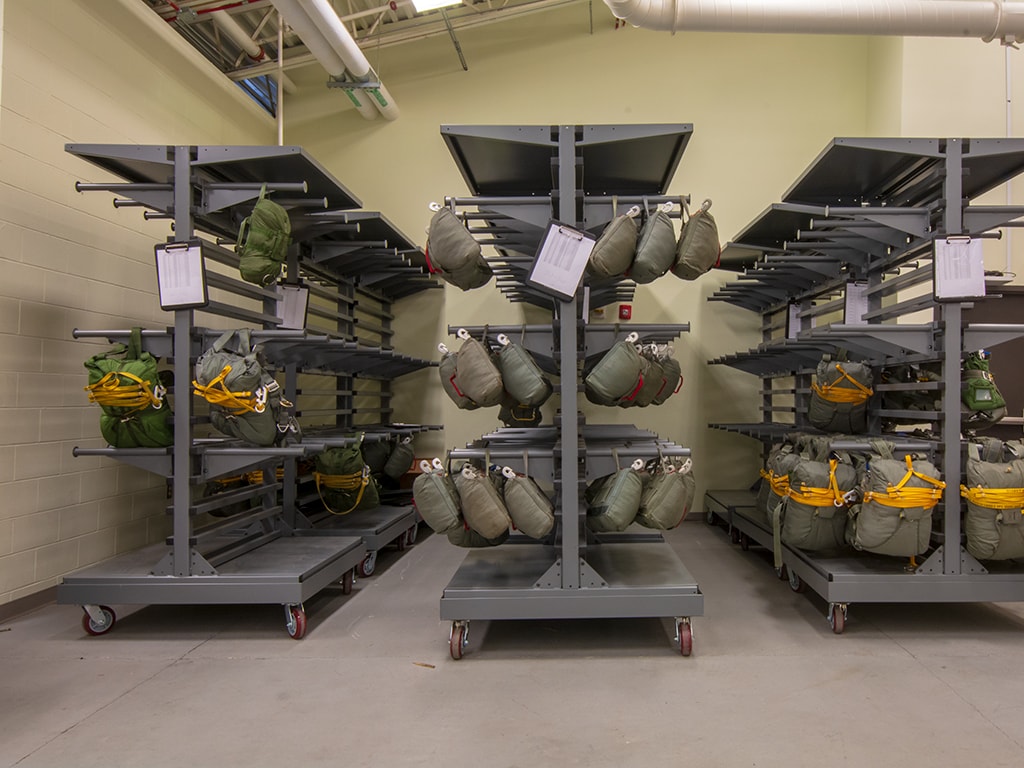 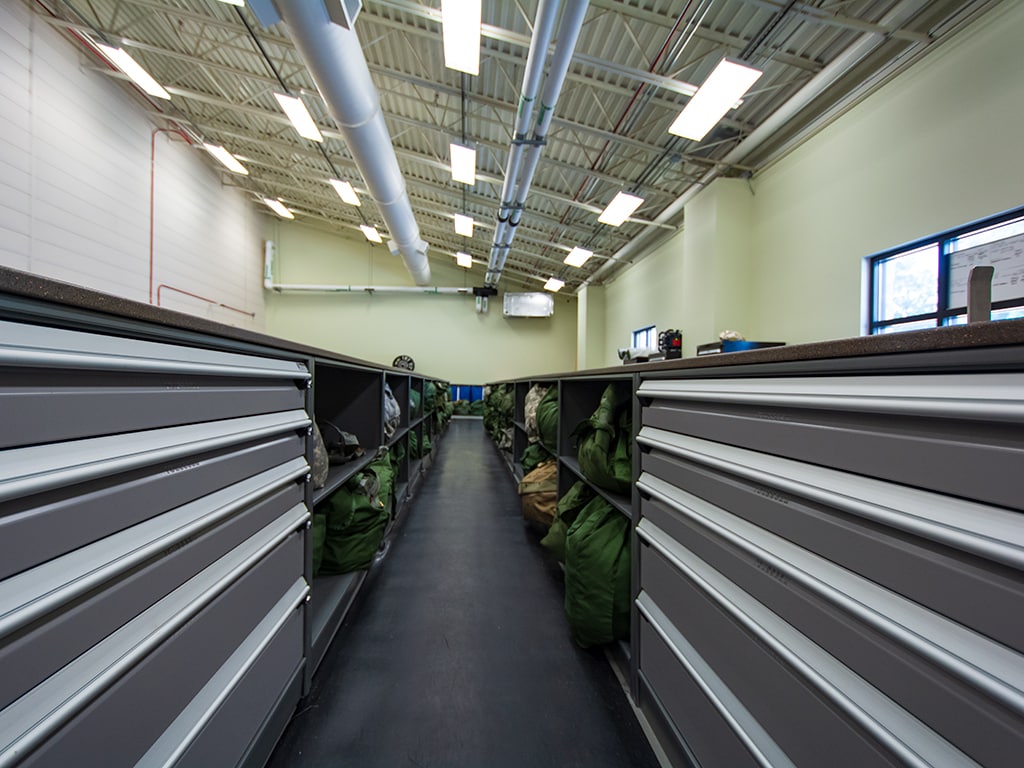 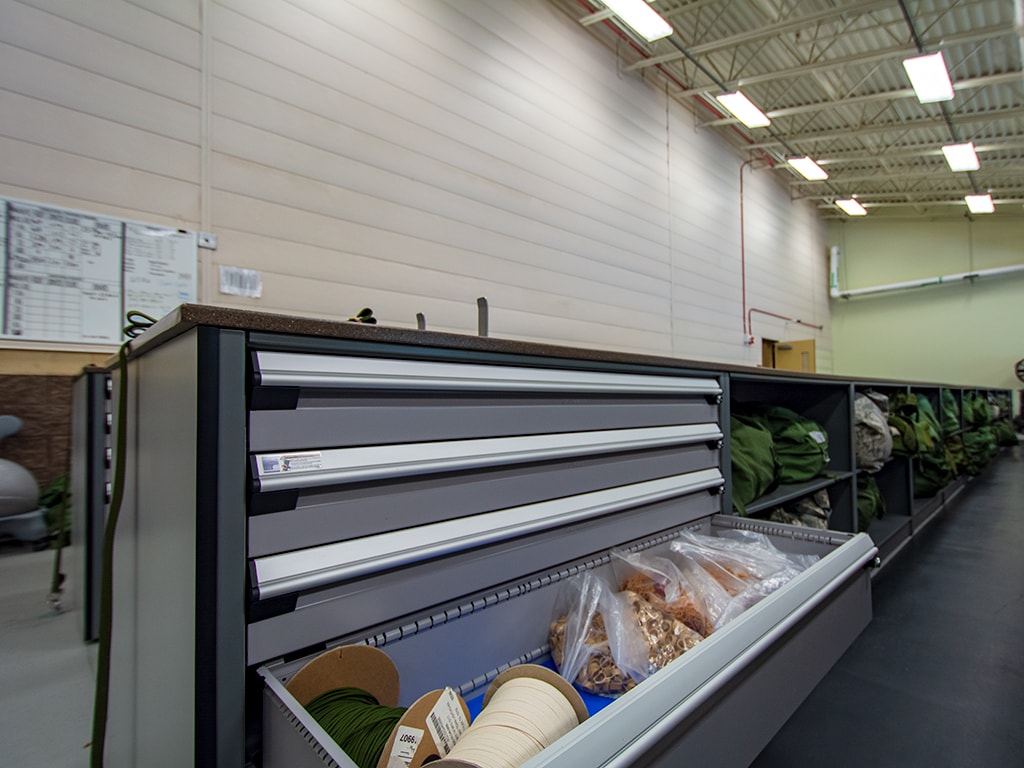 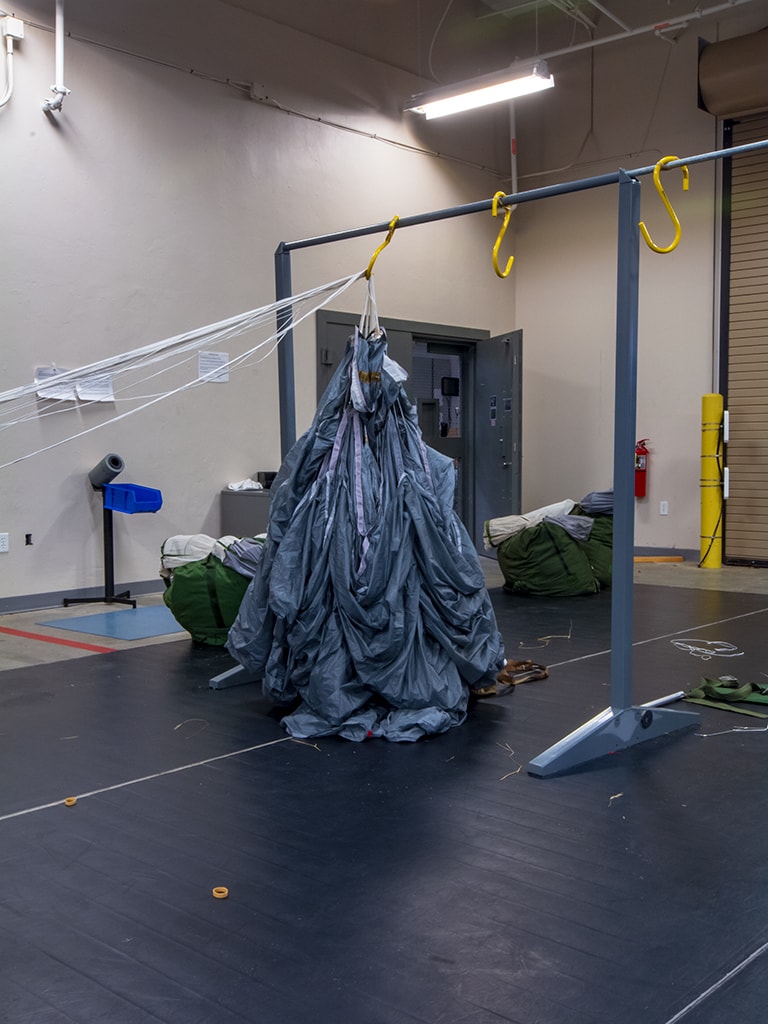 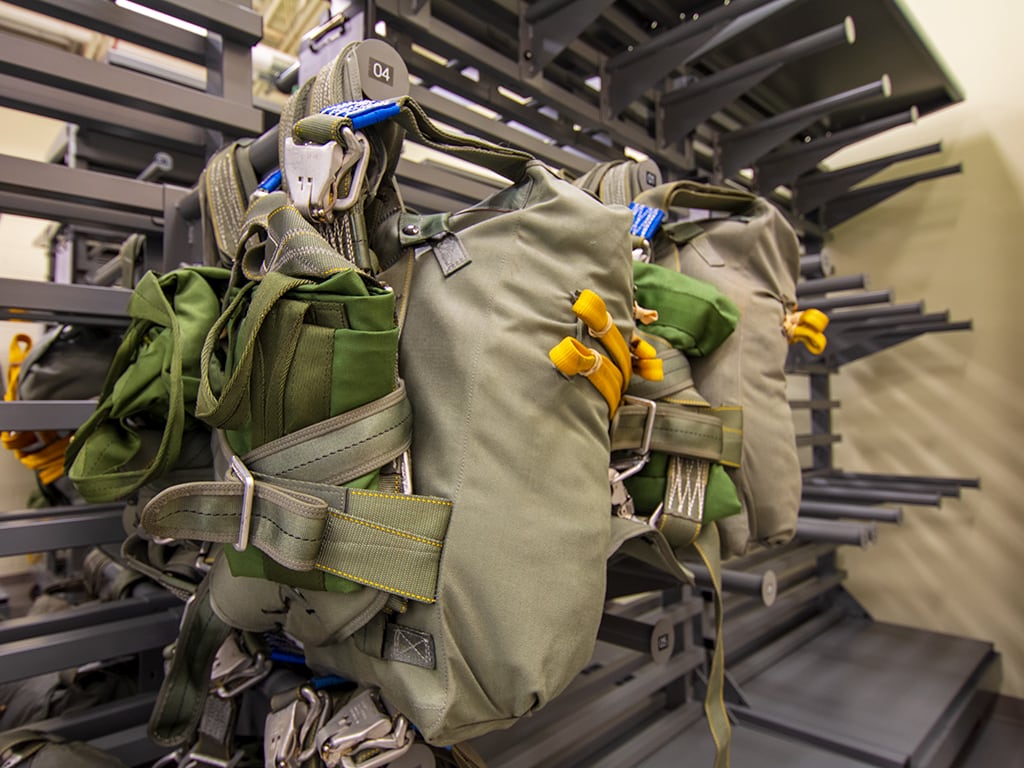