As difficult and astonishing as it may be to think about, just about any object or item can be used as a weapon during the commitment of a crime. All of them, when collected as evidence for use in criminal trials, need to be stored both for the trial itself, and for years afterward. In the event that there is ever an appeal, those items will need to be referenced again – even if that’s 50 years down the road.

Just about any object you can imagine exists in today’s evidence rooms around the country. The room at the Knox County Criminal Court is no different. In addition to that range of evidence alluded to above, there are also bicycles, doors, bed frames, and other pieces of furniture. These are in addition to the guns, narcotics, jewelry, cash and other collected property items like clothing, utensils and electronics.

Mike Hammond is the criminal court clerk for Knox County, Tennessee. When he started his post in 2014, one of his first actions was to survey the evidence room for the Knox County Criminal Court. At the time, the space was packed, some aisles so full of pieces of evidence that it was hard to walk a few feet without stepping over something. For more than 30 years, there had been only one staff member who knew exactly where every piece of evidence was kept. A listing of the room’s inventory was kept on index cards, ala a library card catalog.

“We knew we had to do something,” said Hammond. “I knew that Patterson Pope had done some other work for Knox County, including a state-of-the-art forensics center. So, I went over there and took a look at what they had done. As soon as I saw it, I was impressed. I knew I wanted us to have something similar for the evidence room.”

Once the funding was granted, Hammond and his team contacted Patterson Pope Sales Representative Scott Bertini, who had done prior work throughout the county. The first step was taking a look at what was in the room and talking to the client to determine their needs.

“It was definitely tough to get around in there at first,” said Bertini. “Some items were impossible to even get to without first having to move something else out of the way. I’ve worked enough with evidence rooms to know that that’s just not a good situation to be in, for a variety of reasons. Chief among those, of course, is that this is important stuff. You need evidence to be kept neat, organized and easily accessible.”

As any law enforcement officer or attorney knows, precision is so vitally important. When so many of these items play a role in determining the outcome of criminal trials – including for the most heinous crimes – there’s no room for guesswork or mistakes. Hammond noted how during the infamous O.J. Simpson trial in 1994, mishandled evidence had a definite impact on that case’s resolution.

“A lot of this evidence will be here for another 15, 20, or even 50 years,” said Hammond. “What we wanted to do was two things: first, make certain that we used every square inch of this evidence room to its best advantage. We knew we weren’t going to expand, so we had to be precise with our planning this time around. Second, I fully expected this evidence room to be utilized for the next few decades, so expandability was crucial, too.”

Bertini and the Patterson Pope designers decided on a Powered High-Density Storage System from Spacesaver. Inside the moveable unit are wire rods in 4-post shelving, lockable drawers, weapons racks and even bicycle storage.

“We needed to think about the importance of everything having its own specific space,” said Bertini. “It wasn’t just about organization; it was about facilitating easy access for whoever needed to go down to the room. Everything now has a home and things are easy to find quickly. Plus, there’s room for growth.”

For Hammond, the installation not only makes for a more visually appealing space but allows for better control, as well.

“Before, if someone needed an item, we had to rely on the experience and expertise of just one person. She was literally the only person who knew where things were. Now, we’ve got everything cataloged on the computer thanks to our phenomenal IT department. We’ve got everything organized and know at the tap of a button what aisle, row and bin something is in. It’s wonderful.”

“What we wanted to do was two things: first, make certain that we used every square inch of this evidence room to its best advantage. We knew we weren’t going to expand, so we had to be precise with our planning this time around. Second, I fully expected this evidence room to be utilized for the next few decades, so expandability was
crucial, too.”
Mike Hammond
Criminal Court Clerk – Knox County, Tennessee

During the project, the evidence was moved temporarily into an empty courthouse. It was during that transfer that the entirety of the holdings was counted, identified and cataloged. With the room clear, the floor rails were easily installed, power outlets rearranged to better serve the project, and a better sense of control delivered to the client.

In Patterson Pope, Hammond and his team were able to utilize the experience and expertise of an entire group of professionals who know storage design and are happy to help clients realize their goals.
“I’m always happy to bring what I’ve learned from similar types of situations to bear on any new project,” said Bertini. “I and the whole Patterson Pope team recognize the value of what these evidence rooms bring to a community. We’re happy to help.”

For Hammond, the peace of mind brought about by the new space’s storage installation was well worth the initial up-front investment.

“I would definitely recommend that anyone considering a similar job invite Patterson Pope in for a consultation,” he said. “It was well worth the time and effort. We couldn’t be more pleased with the results.” 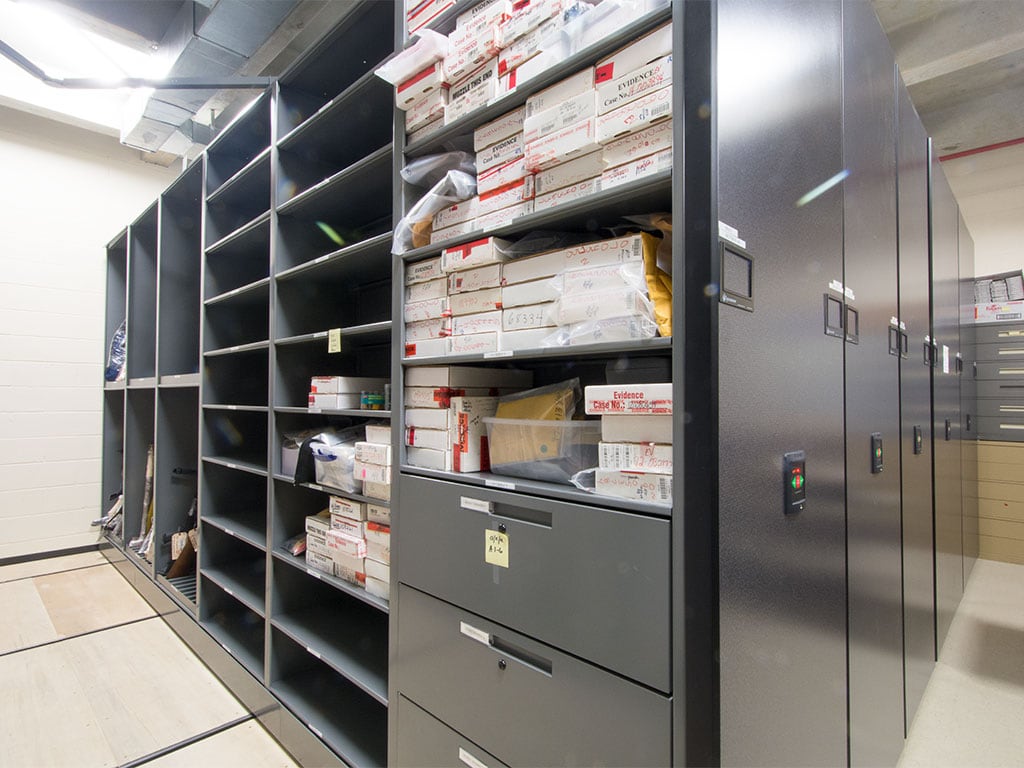 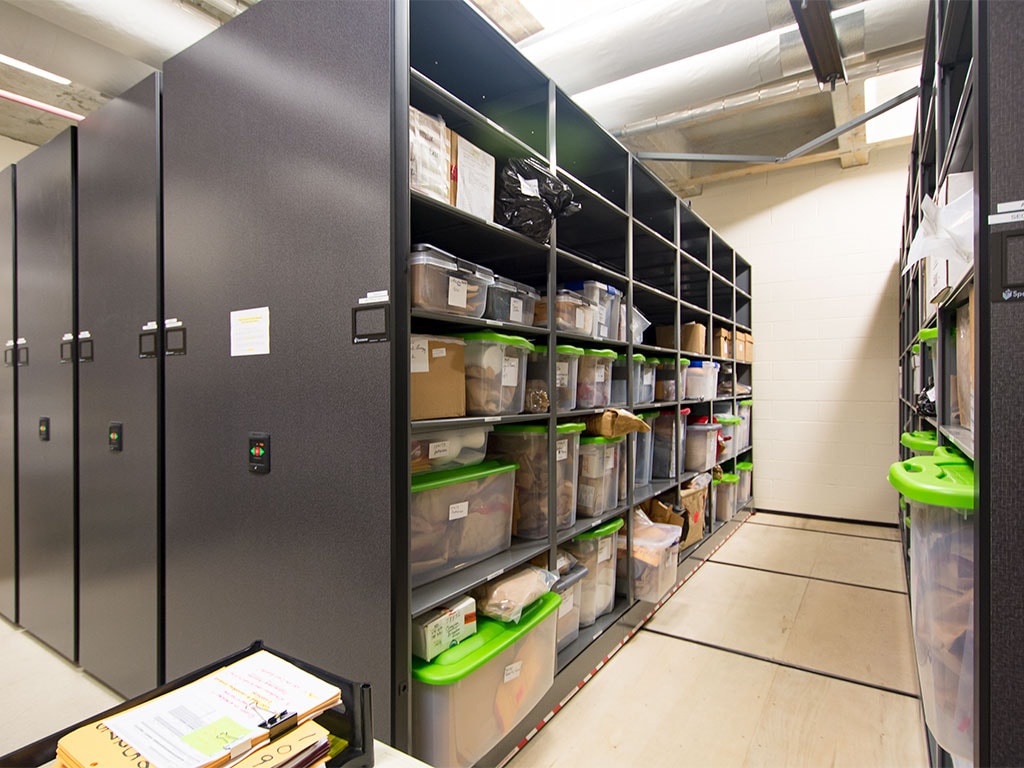 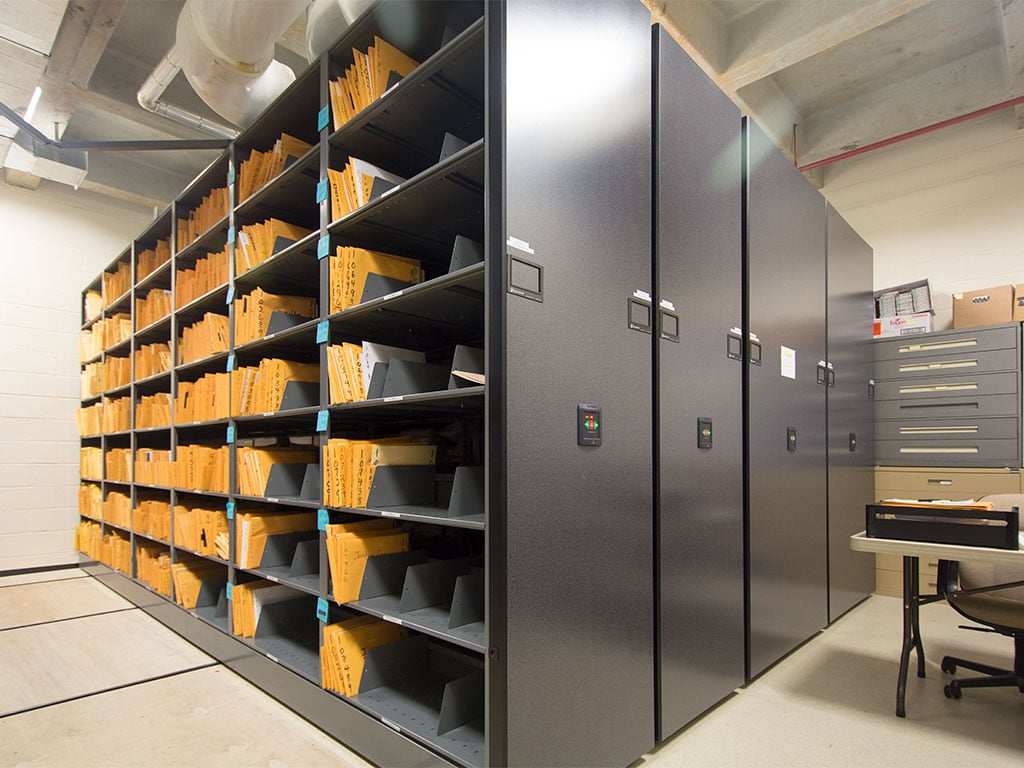