Atlanta’s Delta Flight Museum is a sight to see. It celebrates not only the history of one of America’s most successful and storied companies, but the spirit of freedom and discovery. The public is encouraged to visit the 68,000 square foot facility, which is housed in Delta Air Lines’ original hangars, first constructed in the 1940s. The hangars became the Delta Air Transport Heritage Museum and restoration facility for Delta’s first 21‐passenger Douglas DC‐3 in 1995. In 2011, it was declared an Historic Aerospace Site.

Delta began collecting items to commemorate its history in the 1950s, some 20-plus years after the airline’s founding. As the decades have gone by, the number of items has grown exponentially. Today, the collection includes everything from travel posters and ticket jackets to simulators and actual aircraft. While initially, the items came from current or former Delta employees, today objects come from a variety of sources, including the general public, who may have a few items of their own that they feel can augment the museum’s assemblage.

Tina Seetoo is Delta’s Archives Associate. In her 5½ years with the museum, she has seen the collection’s growth firsthand.

“I do donor relations, so when people call or drop by, I’m the person they talk to,” she said. “I’m responsible for the initial accessioning, and I can tell you that we get new material in every single day.”

Learn how the Delta Flight Museum was able to create a high-density storage solution for a collection of items that included flight crew insignia, bag tags and old advertisements, model airplanes, sculptures, glassware and flatware, china, and more. 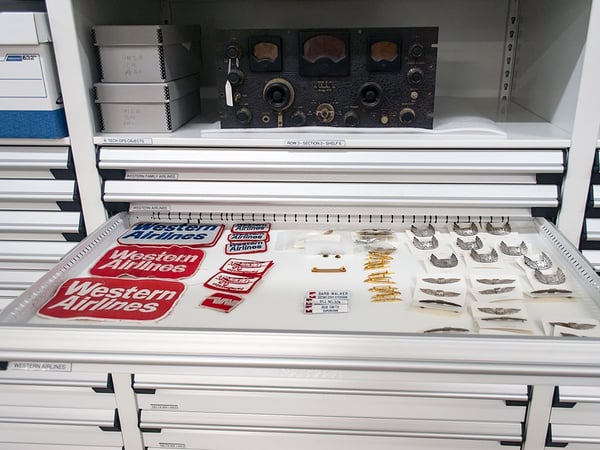 After the museum was renovated, additional scrutiny was given to the archives. At approximately 4,000 square feet, it’s a space that represents just six percent of the museum’s total footprint. Yet in this relatively small area, a large percentage of the museum’s inventory is accessioned, touched up, organized and stored. To ensure the museum’s ability to protect and present the finest examples of Delta’s heritage, it too required a little bit of an upgrade.

“Initially, they had all this wide-span shelving with boxes and boxes of stuff,” said Gene Reilley, the Patterson Pope account representative who worked on the project. “They had so many great items, but they didn’t really know the full volume of it. They had even more great stuff than they knew.”

“Originally, our shelving really wasn’t appropriate for records. Also, a lot of our uniforms were in cabinets that had been adapted with poles for the purpose,” added Seetoo. “We didn’t have enough room in those and they were not deep enough to accommodate clothing. We also had a large portion of our collection that was boxed and needed to be hung but we didn’t have the space.”

For Seetoo, putting the best face on the collection meant partnering with Patterson Pope to first ascertain and innumerate, then organize the storage of archived items. Although not everything in the museum’s collection can be displayed to the public at one time, devising a modern storage philosophy and system could help improve organization now, and assist with display rotation as time went on.

“The first task was to spend some time getting in there and understanding what they had,” said Reilley. “It was fascinating to see all that history. Combining that analysis with in-depth conversations led us to a pretty good plan. Together, we devised a solution that would work within their budget and even leave them room for growth.” 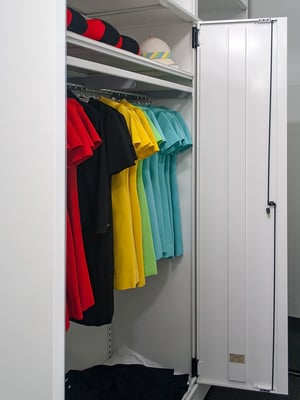 “We alternated the shelving where the clothing/old uniforms are stored,” said Seetoo. “We have one cabinet that has a single bar at the top and holds only hung clothing – those have doors on the front for added protection. Then the next one has separated shelving, where we can store items like purses or shoes or hats. Those are left open. Then, we have shelving along the top of all of them for additional storage.”

Also added in the archive space were art racks; 4-post shelving for artifacts and both archive and file boxes; Rousseau drawers for pins, wings and china; textile racks for banners and flags; and cantilever shelving for a large book collection. There is even space left to add an additional four ranges to the high-density system when Seetoo and her team are ready to expand.

“When we get items in now, we know exactly where they’re going to go and how they’re going to help our collection grow. That exactness, fostered by organization, has been huge. There are over 40 airlines under the Delta Air Lines umbrella. We have sections for different departments in different airlines. Before, we were just putting things in the stacks wherever we had space. Now, we not only have extra space, but we have that organization. The combination has been a real bonus.”
Tina Seetoo
Archives Associate, Delta Air Transport Heritage Museum

What a Difference Museum Design Makes

“When we get items in now, we know exactly where they’re going to go and how they’re going to help our collection grow,” said Seetoo. “That exactness, fostered by organization, has been huge. There are over 40 airlines under the Delta Air Lines umbrella. We have sections for different departments in different airlines. Before, we were just putting things in the stacks wherever we had space. Now, we not only have extra space, but we have that organization. The combination has been a real bonus.”

There is no doubt that the future of air travel will reveal a great many astounding changes. In 2029, when Delta celebrates the 100th anniversary of its first passenger flight, who knows what the experience will be like? There is still much history to be written. For its part, Patterson Pope is happy to play a role, however small, in helping preserve history and continue to share this exciting story.

To learn more about this project, please see our Case Study. 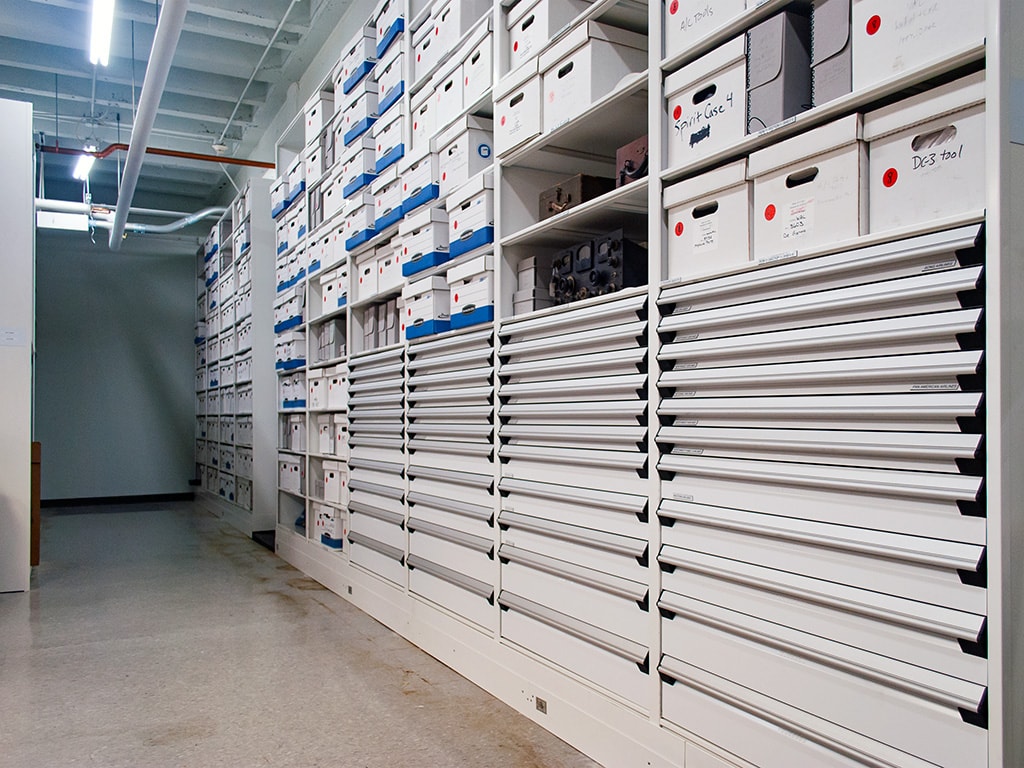 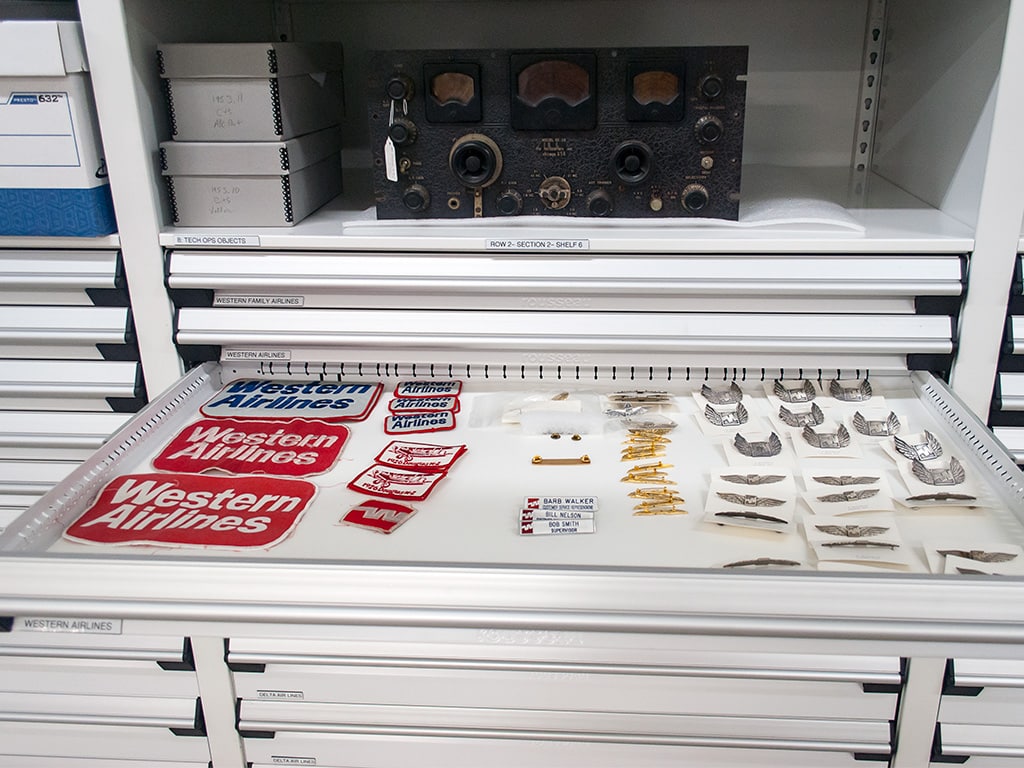 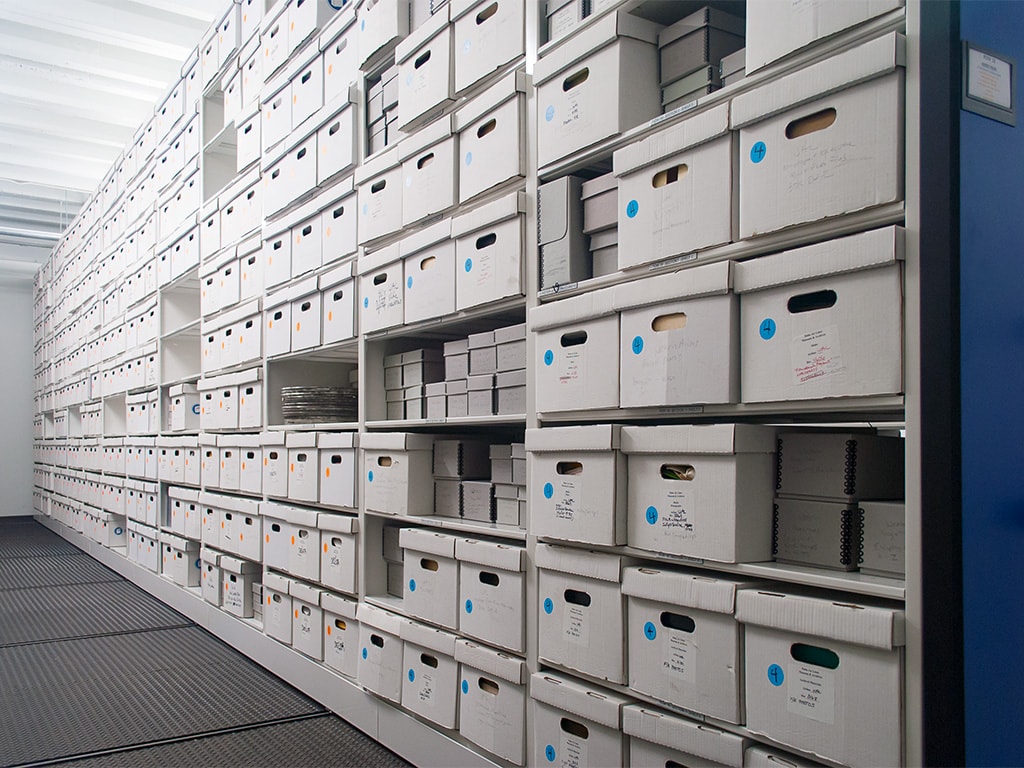 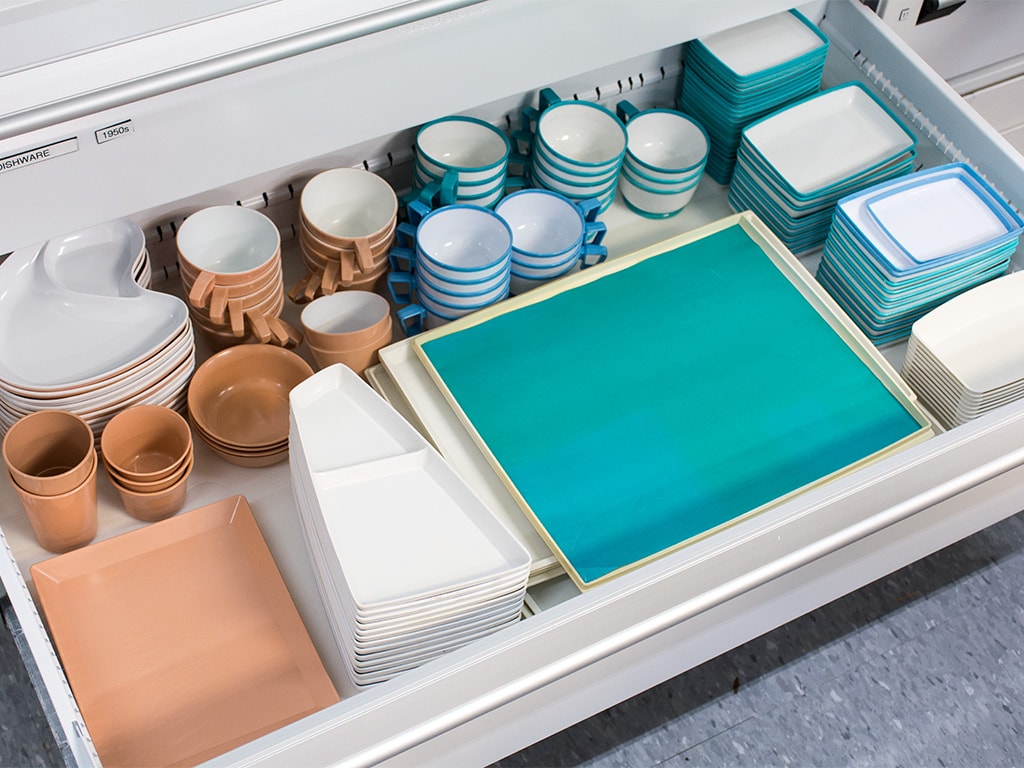 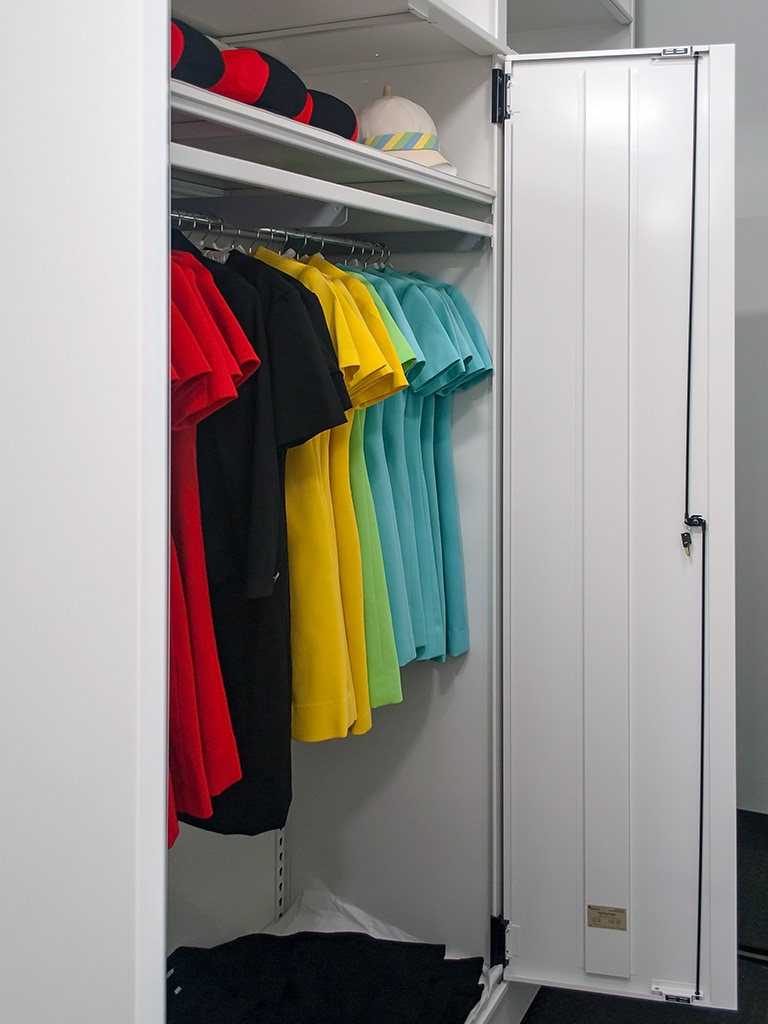 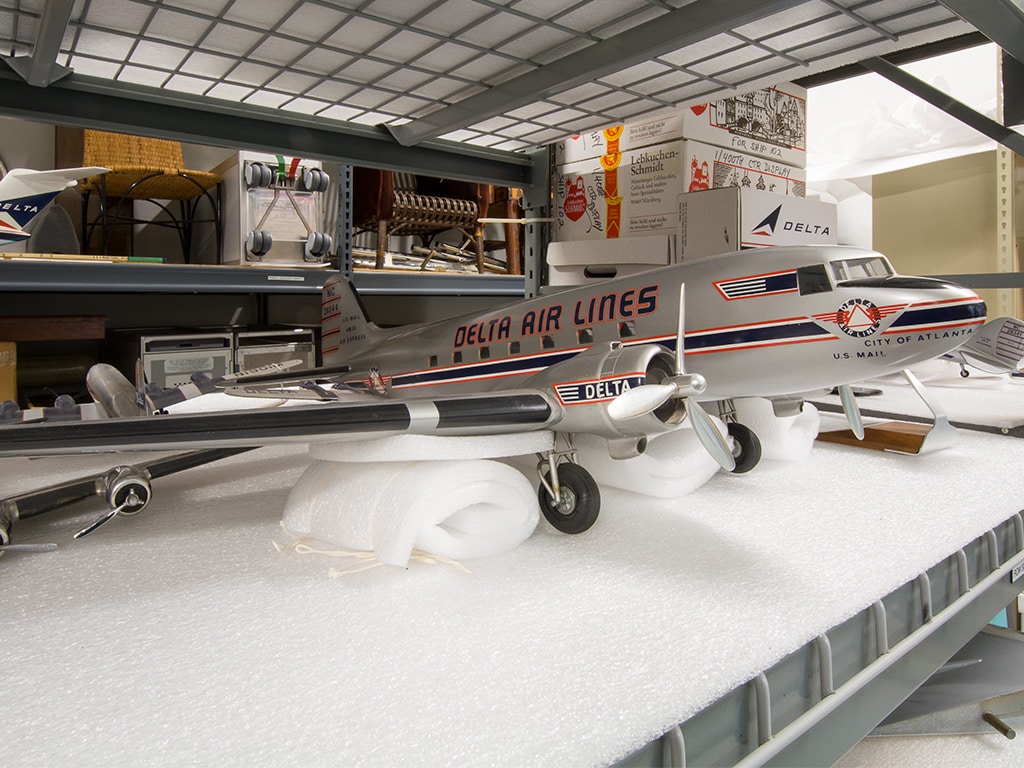