Whenever the Franklin Rebels and the Brentwood Bruins suit up for a football game, it’s a big deal. This isn’t just Southern high school football; it’s close to being a religion. The Nashville, Tennessee rivals always draw a crowd, and that was no different as both teams began their 2018 seasons at the end of August. Close to 7,000 people gathered on that warm summer night to witness something special – a ritual, of sorts, that kicked off another academic year.

Gabriel Evans coaches offensive line for Brentwood. He understands the value of hard work, a team-oriented approach, and solid preparation, to say nothing of execution. As someone who also teaches AP/Honors classes as well, he knows a little something about the value of organization in the pursuit of a job well done.

That’s true on the gridiron, in the classroom, and even in the equipment storage room. Evans, you see, has a third title: equipment manager. As such, finding the right athletic storage solution for an aging set-up was part of his assignment, as well. See how proper football equipment storage can boost school pride. 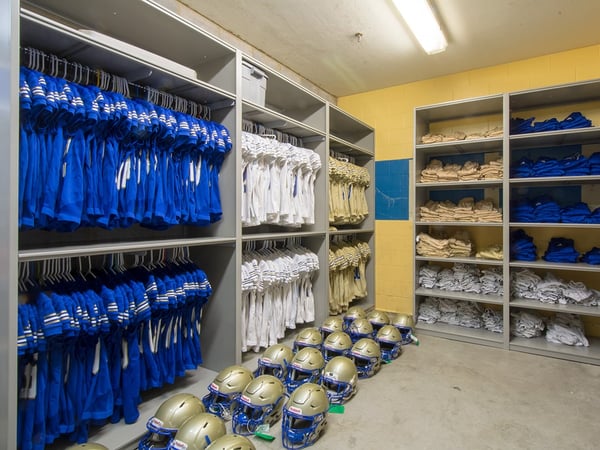 Assessing the State of the Team

That inaugural game this season went to Brentwood, 17-14, thanks to 10 unanswered points late in the game. It was a good way to start the season! On any playing field – sports or not – keeping score is essential; it’s how you measure yourself against the competition. In his role as equipment manager, Evans wants all of Brentwood’s football players to look at themselves with pride at all times. Taking pride in their surroundings is a part of that. When you combine the number of kids from the varsity, junior varsity and the freshman teams, the total can be anywhere from 120 to 150 individuals. That’s a lot of pride!

Brentwood High School has two distinct areas that store football equipment. Most of the loose items (helmets, balls, etc.) and uniforms are kept in a room known as “the cloth room.” There is also a room specifically for shoulder pad storage. Evans distinctly remembers when it occurred to him to think about upgrading the shelving and storage in both rooms.

“In the Cloth Room, we had a serviceable system that some parents had constructed about 15 years ago,” he said. “It was just some posts, some hangers and some dividers. It worked fairly well, but it started getting rickety and it would sway back and forth. I was pretty sure that it was just going to fall over any day. Most of our pants were sort of sitting on factory-type shelving that was kind of larger, bulk construction. It was doable, but it was hard to keep things neat and organized. It was difficult to keep things separated. It was kind of chaotic.”

In the shoulder pad room, pads were being stacked 20 or 30 high on seven makeshift units constructed out of PVC piping. While it, too, served its purpose, the constant compression caused bending, cracking and breakage. Considering that football shoulder pads can cost between $250 and $450 a pair, coaches and equipment managers like Evans understandably want as long a life as possible out of their gear.

Let’s Run with the Option

As the individual charged with maintaining the Bruins’ equipment, Evans went online to research some available storage upgrade options. That’s when he found several pictures of previous installs done by Patterson Pope for football programs at the high school level, college level and among the professional ranks. He was put in touch with sales representative Paul Myers, and the game plan went into motion.

“From the moment I met him, Gabriel had a pretty strong sense of what he wanted,” said Myers. “That made for a really smooth process. We met, he told me a bit about his ideas for the space, and we discussed some options that really fit nicely into the scheme.” 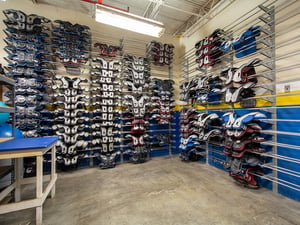 In the shoulder pad room, a combination of wall-hung cantilever shelving and Oblique shoulder pad storage has not only created more organization, but it’s added a highlighted focal point for visitors, as well. In an area measuring nearly 200 square feet, Evans can now store shoulder pads seven or eight high, each pair resting on its own support structure. Now, the only damage to the pads comes from on-field contact between players – as it should be.

“Both areas look really nice right now. Everyone loves it,” said Evans. “The kids especially love the shoulder pad room because it just looks really cool. The students think it looks more like a college setup. They take pride knowing that their stuff looks great, is super organized and clean. I like them feeling that they’re being taken care of and that we’re doing things the right way.”

Nothing worth doing is ever achieved without the proper support. At Brentwood High School, that support comes in the guise of The 12th Man Club, a booster club comprised of school parents who are always eager to show their support – in spirit and financially – for the school’s athletic endeavors.

“Their backing is always phenomenal,” added Evans. “When I was putting the designs together for what we eventually came up with, I of course ran it by members of the board. Their financial contribution was significant, so I wanted to make sure we got it right. They were behind me at every step, and I couldn’t be more appreciative.”

Decals bearing the 12th Man’s logo are affixed to the shelving. Evans said the visuals are constant acknowledgments of the boosters’ support. With that simple reminder, Bruins athletes get to reap the benefits of their generosity and commitment every single day.

“Both areas look really nice right now. Everyone loves it. The kids especially love the shoulder pad room because it just looks really cool. The students think it looks more like a college setup. They take pride knowing that their stuff looks great, is super organized and clean. I like them feeling that they’re being taken care of and that we’re doing things the right way.”

Put in the Work and Reap the Rewards

“This was such a fun project,” said Myers. “Certainly, being a football fan myself made me feel a really good connection to Gabriel and what he was trying to accomplish. I’m so glad we could make it happen. I may not be able to play wide receiver any more, but I do what I can to contribute.”

For Gabriel Evans, the new look of the football equipment storage areas are a physical embodiment of his commitment to doing his best for his team – his kids. As a teacher, he enjoys setting a good example.

“Being the one in charge, and having to account for everything, I want to know who’s in, who’s out, what items they’re getting, how much they’ve got, where our jerseys are at all times. Being organized and being able to see everything makes that all much more possible.”

As for the process itself? Easier, perhaps, than some of Evans’s tests he gives as a U.S. History teacher.

“I highly recommend Patterson Pope,” he said. “They gave me options. Certainly, different schools are going to be indifferent financial positions – that’s a given – but when you look at the cost-effectiveness and what it saves you in the long run, it’s definitely worth the investment, at whatever level. It’s a game changer. Anything that makes the transition from one to the other easier is a win in my book.”

Thanks, Coach. Anything for the team. 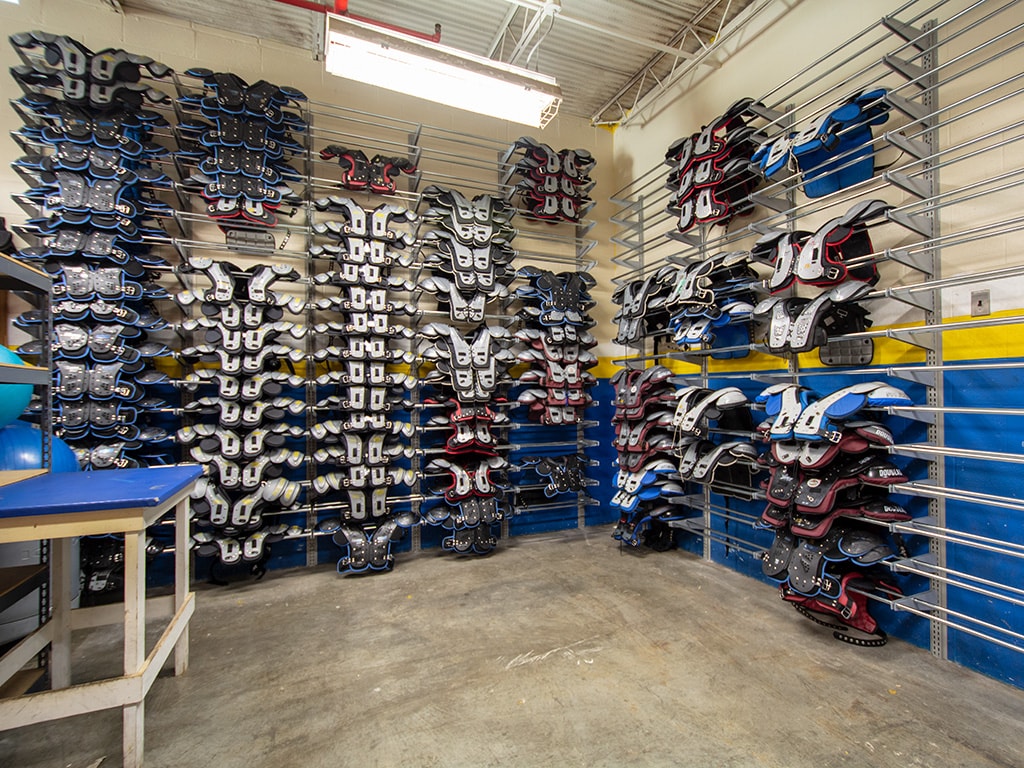 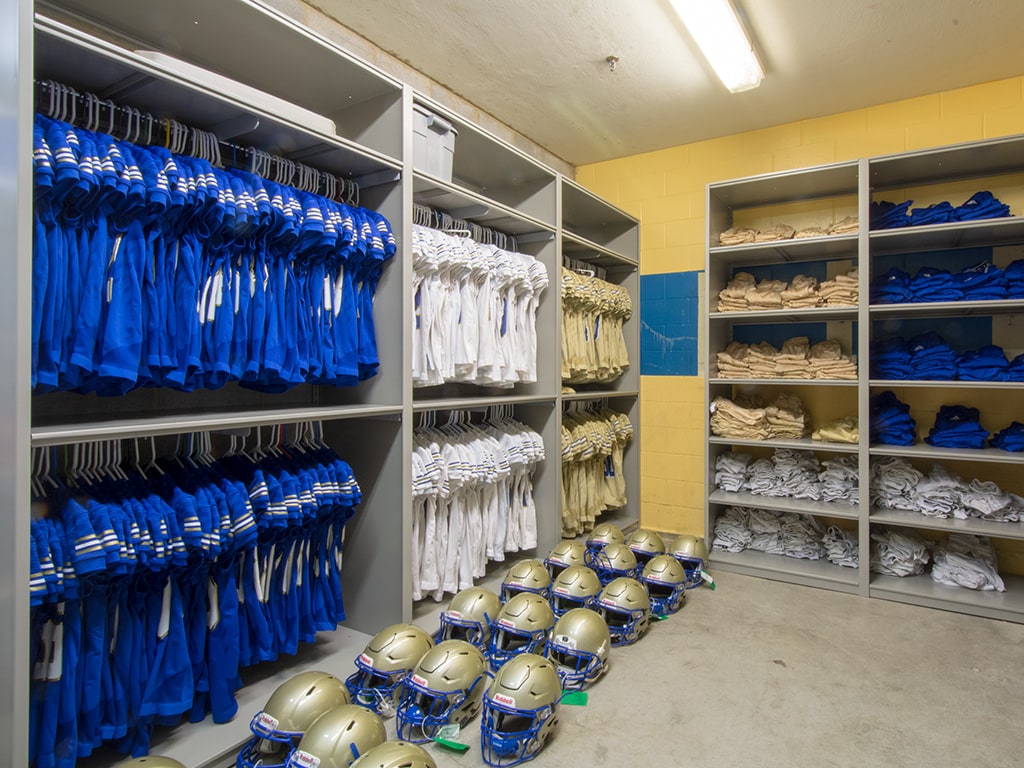 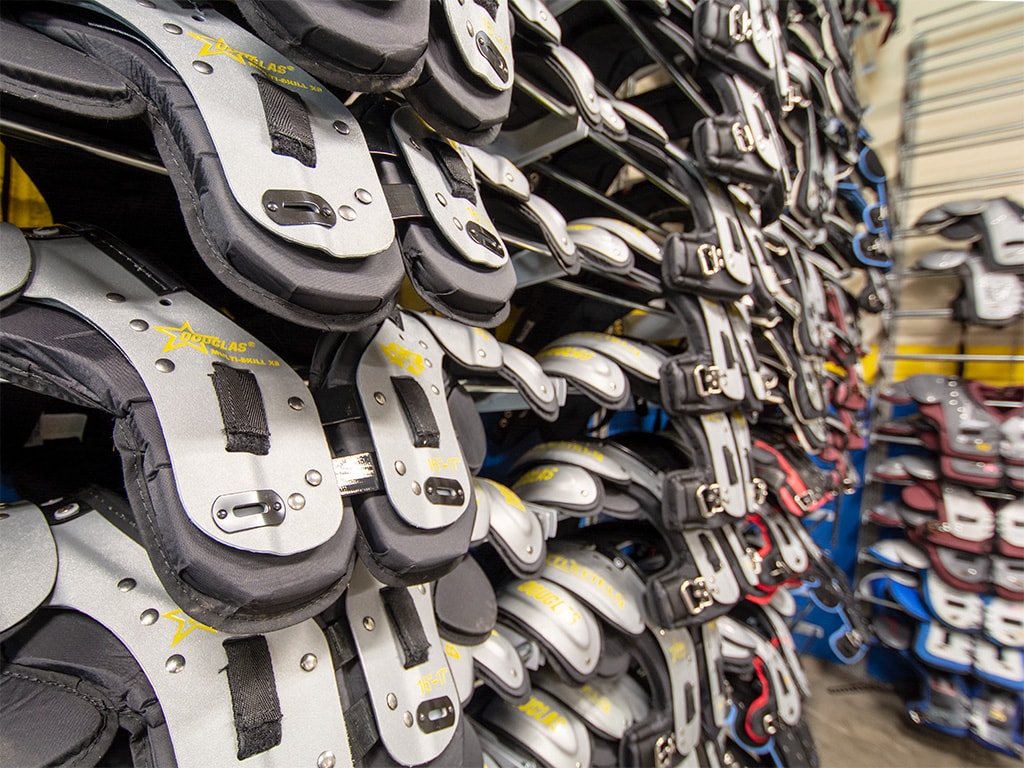