A Modernist Take on the Art of Storage

In an artistic sense, it refers to the ability to see the potential in something before it even exists. Painters, writers, and musicians – both famous and obscure – have the knack for conceiving of an idea in their mind’s eye before they have even begun to bring it into the real world. Where that inspiration comes from has been argued for millennia. One thing is clear: the aptitude for art is a gift in itself. And yes, it can even happen in art rack storage.

Bo Bartlett is a realist painter. If you’re new to his work, think of a 21st century Norman Rockwell and you’ll have a pretty good conception of the kind of work Bo Bartlett creates. In fact, he counts Rockwell as one of his earliest influences. A native of Columbus, Georgia, Bartlett studied art in Florence, Italy following high school and later honed his craft at The Pennsylvania Academy, the oldest art school in America.

Today, Bartlett is renowned. He splits his time between a home/studio in Georgia during the winter and a rustic island in Maine during the summer months. A man with a strong sense of who he is and where he’s from, he’s strongly inspired by place and family. For several years, he’s taught classes at Columbus State University. Giving back to his native community is a point of pride.

Learn how the Bo Bartlett Center, a part of Columbus State University’s College of the Arts, was able to efficiently store large art work in a small (but tall) space.

Like many older cities in the United States, Columbus, Georgia is experiencing a revival. Filled with historic charm, it is today blossoming with new restaurants, shops, and artistic outlets. The Springer Opera House, the Schwob School of Music and the Columbus Museum are just a few examples.

In an effort to further augment the city’s renaissance and celebrate one its native sons, Columbus State University developed the idea of the Bo Bartlett Center. To that end, it purchased an old cotton mill on the shores of the Chattahoochee River, about 10 miles from campus.

David Houston is the center’s executive director. He well remembers the excitement – and the challenge – of creating what is today a remarkable 18,425 square foot gallery and learning center.

Houston and the university worked with Tom Kundig, an architect out of Seattle (Olson Kundig) known for his work with kinetics.

“We knew from the outset that we wanted this to be a gallery that celebrated great art,” said Houston. “The gallery is grounded on the collection from Otis and Sandy Scarborough, who donated eight paintings to the university. Those eight paintings have a permanent home here, but most of the art in the building will circulate in and out. It’s a changing exhibition space that doesn’t have a large permanent collection.”

“Having worked with many different companies through the years, one of the things I really appreciate about Patterson Pope is the turnkey nature of their work. The ability to fabricate on a very custom level gave us the ability to adapt to a very difficult space."
David Houston

The word “artist” is often used to describe a person whose expertise lies outside the traditional arts, as well. It can be someone who possesses the ability to think outside the box, or it might be an individual who has an uncanny ability to bring different areas of expertise to bear into a unique situation.

Dick Beery might never refer to himself as an artist, but the Patterson Pope sales representative does have a good bit of knowledge about both the construction business and, of course, storage. Both were tapped when the opportunity arose to help David Houston address his need for optimal art storage at the Bo Bartlett Center.

“As large and awe-inspiring as the Center is, the amount of storage area they have is a fraction of their total space,” said Beery. “The storage area measures 14’ x 37’. Think about it. That’s just 518 square feet, whereas the whole Center is more than 14,000 square feet. So it was a challenge.”

“One of the things I really appreciated about Dick’s assistance and that of Patterson Pope was his ingenuity,” said Houston. “Dick and I had many conversations about how we could maximize the relatively small footprint.”

No architectural drawings existed for the renovated mill, built in the 1960s. For Beery, the challenge was a welcome one.

“The Center – and the space we were looking at – is located on the second floor of the building,” he said. “Given its age and the fact that we had no drawings to reference, one of the first things we had to do was bring in a structural engineer to analyze what type of load the floors could handle.”

While the 518 square feet room was long and narrow, it did boast one very interesting feature for Beery; namely, the 23’ high ceilings. Once the floor’s weight load was determined, Beery quickly decided that using the storage room’s extensive height was an advantage that needed to be exploited.

“It was a great solution for a couple of reasons,” said Beery. “Firstly, by adding art racks to the upper walls, it made it easier to accommodate some of the larger Bartlett works, some of which can measure 16’ high. Secondly, it allowed for the installation of a manual assist high-density art storage system in center of the room. There is one large center aisle, and four moveable aisles, each measuring 20’ x 10’.”

Laying the rails for the high-density system required pouring two inches of concrete onto an existing concrete slab. That required scarring of the original slab, as concrete does not easily adhere to concrete. The scarring adds pores, which in turn lead to a stronger bond. It was just one more example of Beery’s attention to construction detail paying off.

A man-aboard lift was added to the project out of necessity. The mechanical assistance is essential, whether hanging or retrieving artwork, or adjusting lighting.

Moveable Art Storage – A Feast for the Eyes

Alas, the storage room is already nearing capacity. It’s the nature of the beast.

“There is never enough room,” said Houston. “The art moves in and out, and that’s kind of the model we’re following here.”

Stark black-and-white coloring belies the many colorful examples of design creativity reflected in the space. Architect Tom Kundig’s affinity for kinetics came into play nicely for the Bo Bartlett Center. Walls measuring 17 feet tall, 31 feet wide, and each weighing 5,000 pounds can be moved by a single person. The moveable walls help easily re-purpose spaces from galleries to classrooms to meeting spaces and to galleries again. The art storage lies behind one of these walls.

“It’s an amazing place to visit,” added Beery. He and his wife attended the grand opening, where they were fortunate enough to meet Bo Bartlett himself. They even had their picture snapped with the famous artist.

“Having worked with many different companies through the years, one of the things I really appreciate about Patterson Pope is the turnkey nature of their work,” said Houston. “The ability to fabricate on a very custom level gave us the ability to adapt to a very difficult space. Having space-saving units gave us the capacity we needed in a relatively small footprint. It allowed us to store both are permanent pieces (which are few) and then bring the changing exhibitions in and out, keep them safely off the floor and locked away out of the public view.”

To learn more about this project, please see our Case Study. 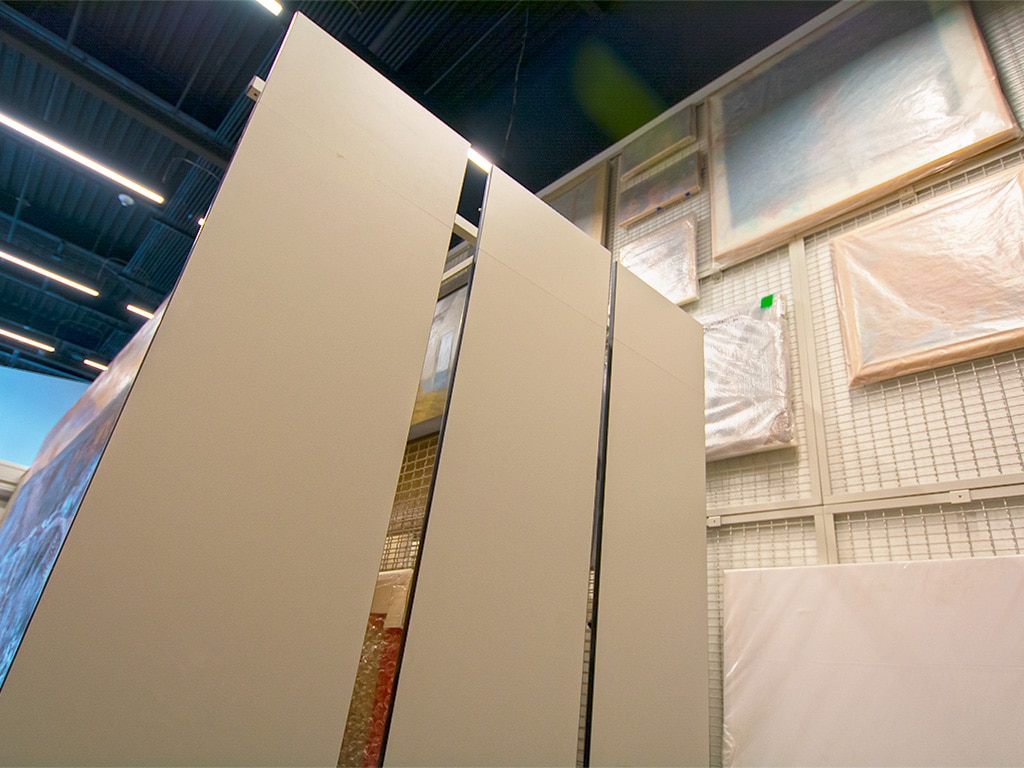 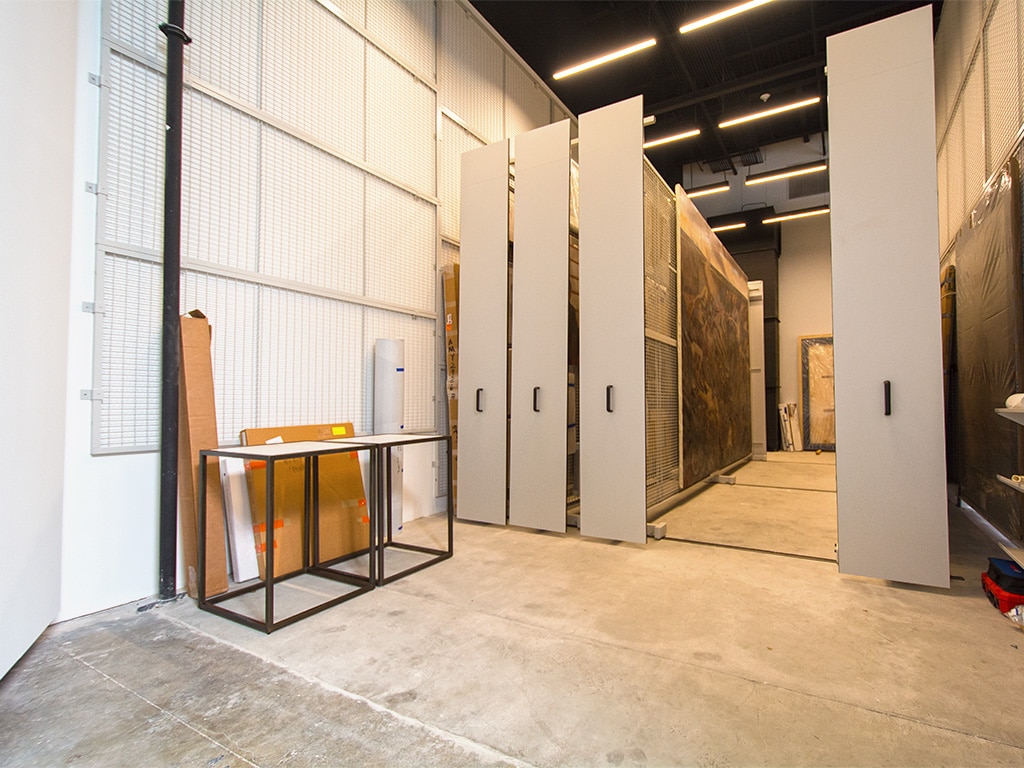 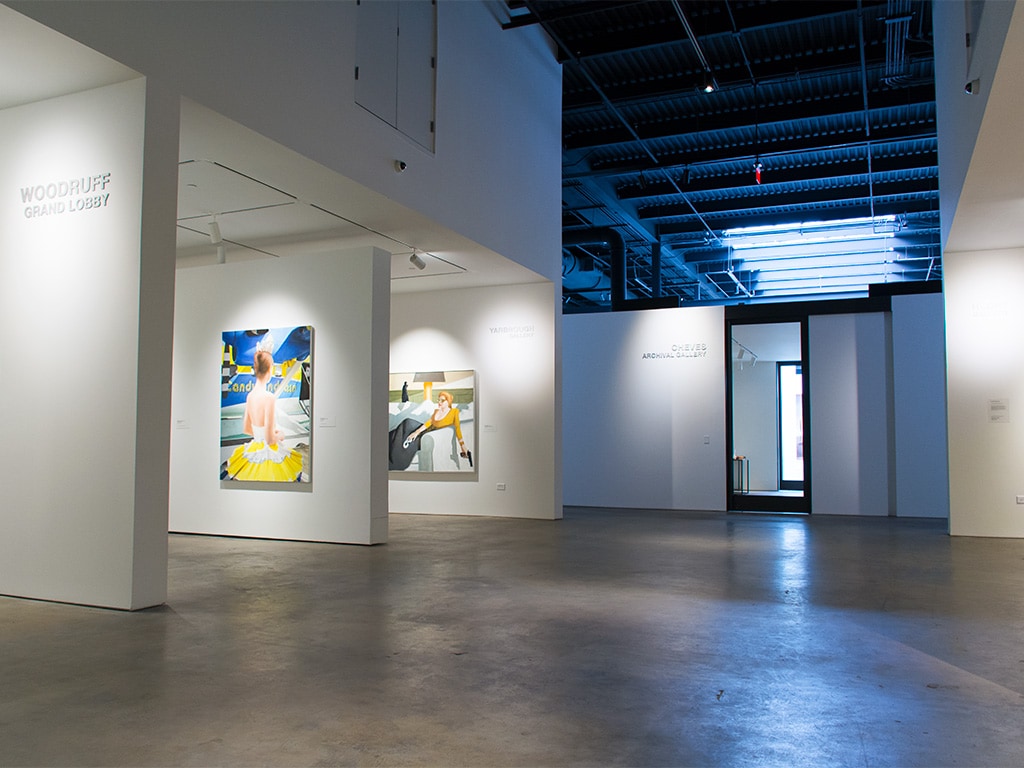